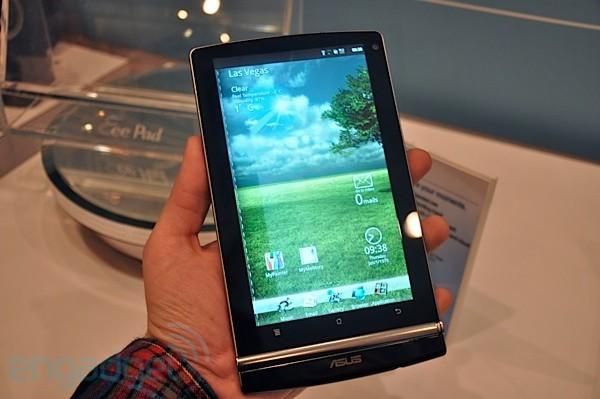 We just played with ASUS whole new tablet lineup, which is truly impressive not only in scope, but also for the fact that ASUS didn't just pick a few capacitive screen sizes and call it a day. Each of the four tablets (three Android-based Eee Pads and one Windows-based Eee Slate) has its own "twist" on what's come to seem traditional in modern day tablets, while also maintaining significant hardware and screen quality. We're not crazy about the 'MyWave' ASUS software skin on its Android models, but they at least seem serious about providing UI and apps for the entire experience -- they're not kidding around, is what we're saying.

We've got a ton of pictures and impressions, so follow after the break as we break it all down!

Update: We've added video as well. You'd be a fool not to click.

Eee Pad Transformer - this is possibly the most traditional of this line, because the tablet itself is simply a 10.1-inch capacitive screen in an exceedingly thin (and light!) form factor. However, ASUS didn't stop there, and you can dock the Transformer into an optional keyboard to turn in basically into a very thin Android laptop, complete with keyboard, trackpad and USB peripheral support (like an external mouse). It's no Motorola Atrix, since you're dealing with the same skin whether docked or undocked, but from what we've seen of Honeycomb that might not be too much of a usability stretch. Eee Pad Slider - We're part of the (possible minority) that uses our Tablet Model of Choice with a keyboard just as much as without, and the Eee Pad Slider seems aimed at that use. There's a surprisingly nice slide-out miniature chiclet keyboard (think on-par with a $300 netbook), which also acts as the stand for the laptop when pulled out. The base also hold's the tablet's battery, leaving the screen itself scary thin. The sliding mechanism we saw wasn't that great -- you had to leverage the screen just right to open it easily, but we were dealing with prototypes and we expect the final product to be better in this regard. Eee Pad MeMO - This is possibly our favorite of the models, thanks to its small size and emphasis on pen input. ASUS extended the bezel below the screen to make room for a stylus, a perfect solution because it leaves the tablet itself exceedingly thin -- one of the thinnest we've seen in a 7-inch form factor. The actual screen feels very much like standard high quality capacitive glass, and it's also very bright and viewing angle-friendly. However, "pressure sensitive" pen input is possible thanks to a rubberized nub on the stylus that flexes and expands based on your pressure and input. It's not Wacom-quality, but it's a lot nicer than binary stylus input on most tablets. Eee Slate EP121 - Windows 7 and tablets have a bit of a sordid history, but we think ASUS has taken the right approach with the Eee Slate EP121. It's large, high-powered (Core i5), has a Wacom digitizer for exceptional pen input, and ASUS bundles a Bluetooth keyboard just to make sure you don't get any ideas about trying to pen-input a novel. Despite the 12.1-inch size, the tablet is still surprisingly thin and light, though it really seems better suited for desk use than schlepping around to coffee shops -- more of a poor man's Cintiq than the iPad of Windows 7 tablets. Our only gripe was the fact that the finger touch input didn't feel as good as the Android tablets in the bunch -- not bad, just not excellent. 
MyWave - ASUS is doing its own UI and core apps, dubbed MyWave, which seems a little silly with Honeycomb on the way. Right now ASUS is demoing the tablets with Froyo, though they have roughly working Gingerbread in the wings. However, the tablets won't ship without Honeycomb, so our great dream is that when ASUS gets ahold of the final 3.0 build they'll realize that Google has a lot more money to spend on perfecting UI and core apps. Perhaps a light touch of a skin wouldn't hurt, and of course ASUS has to work its partnerships, but these tablets would be really badly served without Google's core apps (mail, gallery, media playback [if Google actually builds a good DLNA-friendly player], and browser), or Google's overall UI metaphors it's sweating to build for tablets in Honeycomb.
In this article: android, asus, asus eee pad, AsusEeePad, ces, ces 2011, ces2011, eee pad, eee pad memo, eee slate, EeePad, EeePadMemo, EeeSlate, ep121, google honey comb, GoogleHoneyComb, hands-on, honey comb, honeycomb, impressions, memo, preview, prototype, slate, slider, tablet, transform, video, windows 7, Windows7
All products recommended by Engadget are selected by our editorial team, independent of our parent company. Some of our stories include affiliate links. If you buy something through one of these links, we may earn an affiliate commission.
Share
Tweet
Share