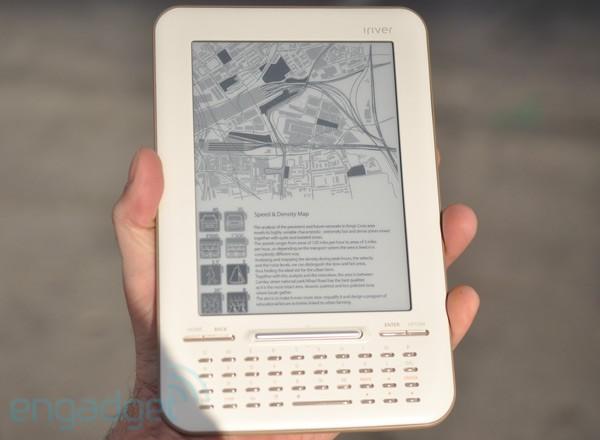 Our trailer was just visited by an iriver rep bearing his company's Kindle killer in waiting, the Story HD. This 6-inch e-reader touts a bodacious 1024 x 768 resolution, which contributes to an even better contrast ratio than on Amazon's E Ink slate, while software optimizations between now and release are expected to make the Story HD the fastest-refreshing device of its kind. The display itself is built by LG Display and is accompanied by a Freescale Cortex A8 CPU, 2GB of onboard storage, and an SDHC card-reading slot. Sun rays are, as expected, absolutely no problem and we have to admit that on first sight we thought the device had a sticker affixed to its front -- its that good at reproducing printed materials. Physically, it seems to have been constructed with the third-gen Kindle as its dimensional blueprint, albeit with quite a different control scheme. The hand-built proto unit we played with wasn't really ready to have its ergonomics judged properly, but iriver has plenty of time until the expected May launch to iron out any kinks. Content distribution partnerships have already been sewn up for the US, so now it's just a matter of patience until we get our e-reading on in gorgeous XGA resolution. Video hands-on after the break.