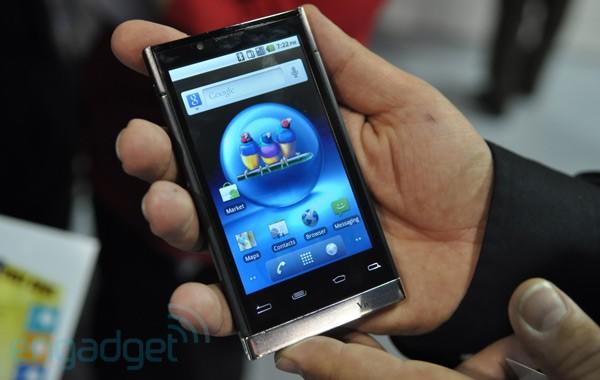 ViewSonic's taking tablets to great new lows here at CES, calling its new 4.1-inch ViewPad 4 a "tablet device with smartphone functionality." Whatever the description, though, this is a pretty handsome, angular Froyo handset with an 800 x 480 resolution, 5 megapixel camera that can record 1080p 720p video, a front-facing imager, 2GB of ROM, and either 512MB or 1GB of RAM. The spec sheet we found online says the former, but the chap at ViewSonic's stand today told us the latter. Either way, we're really liking the smoothness of the Android UI on this tabletphone, it was very pleasantly responsive. The most shocking thing about the ViewPad 4, however, might be its launch date, which we were told will be somewhere around mid-June. Froyo in mid-June ... really? Get your video hands-on fix after the break.

Update: A second pass through the ViewSonic stand informed us that actually the ViewPad 4 is only capable of 720p video recording. Bogus, man.

"ViewSonic's heritage in display technology serves as a natural extension of our product expertise," said Jeff Volpe, vice president and general manager for ViewSonic Americas. "We have been at the forefront of visual display technology for nearly 25 years, 10 of which have been spent in the tablet space. We are proud to extend our tablet legacy by expanding our ViewPad offerings to incorporate new solutions like the ViewPad 4 that put ViewSonic anywhere consumers share, play and connect."

ViewSonic will now offer connected ViewPad solutions ranging from 4 to 10 inches, allowing consumers to select the ViewPad that works best for their needs. As part of this expansion, the company is introducing the ViewPad 4, an Android-based 4.1-inch WVGA touch capacitive device offering tablet power and performance -- and a phone -- all for carrying in your pocket. Based on a Qualcomm® MSM 8255, 1GHz platform, the ViewPad 4 offers full cell phone functionality bundled with HD 720p video recording, playback, upload and HDMI 720p display output. A 5-megapixel auto-focus camera and Bluetooth® 2.1 and 802.11 b/g/n wireless enable video telephony. Additionally, GPS / A-GPS functionality makes it easy to identify points of interest from anywhere. The ViewPad 4 will be available in the middle of 2011. Pricing will be dependent upon carriers.

Today's growth of the ViewPad line complements the rest of ViewSonic's tablet line being showcased at CES, including the ViewPad 7 and the ViewPad 10. Now available for purchase for an ESP of $459, the ViewPad 7 is a 7-inch Android 2.2-based tablet that combines a Qualcomm® MSM7227 600MHz processor with 3.5G data technology. With an 800x400 WVGA LCD screen in a lightweight, pocket-sized design, this device is one of the few 7-inch tablets to offer Android Google Mobile Services (GMS) for access to more than 100,000 Google apps and games along with Gmail, YouTube and more for a convenient entertainment solution that fits their mobile lifestyle. Teamed with built-in 3-megapixel, dual front and rear cameras, GPS/A-GPS, an integrated e-book reader, Document-To-Go functionality and an ultra long battery life of up to 10 hours, the ViewPad 7 ensures consumers can bring all their favorite multimedia content with them wherever they go.

ViewSonic's 10.1-inch Wi-Fi based ViewPad 10 tablet offers the best of both worlds with dual operating systems, giving consumers a choice between Windows® 7 Home Premium and Google Android 1.6 within the same device. With a high speed Intel® Atom™ 1.66GHz processor and sharp 1024x600 LED backlit panel, this tablet is ideal for consumers that want to use Windows to view Flash-based content and Office programs, and Android for mobile entertainment. The ViewPad 10 is on track for availability in March for an ESP of $629, as scheduled.

In this article: 1080p, 4-inch, android, android 2.2, Android2.2, ces, ces 2011, ces2011, froyo, hands-on, qualcomm, video, viewpad, viewpad 4, Viewpad4, viewsonic
All products recommended by Engadget are selected by our editorial team, independent of our parent company. Some of our stories include affiliate links. If you buy something through one of these links, we may earn an affiliate commission.
Share
Tweet
Share