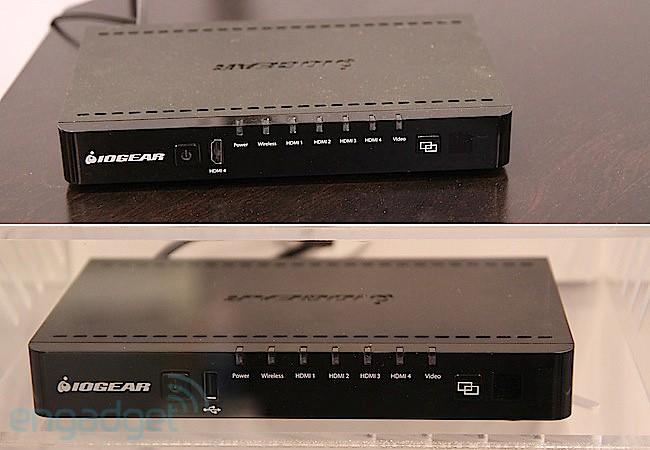 We went hands-on with IOGEAR's wireless HD system last year at CES, and now we've managed to do the same with a prototype of the boutique brand's new GW3DKIT 3D wireless streamer. The kit consists of a 3D transmitter and receiver that each feature four HDMI inputs as well as one component, composite, VGA, and USB input. Each box also features one HDMI and USB output. Together the system is designed to stream full 1080p 60Hz HD video / 5.1 audio along with 3D content over WiFi (802.11n) from as far as 100 feet away with supposedly little latency or wireless interference. IOGEAR says to expect the system sometime in Q1 of 2011, and no official pricing is available yet, but we've been told it would be around $499 by IOGEAR's CES booth staff. If everything performs as advertised, it sounds like a great solution for you home theater minimalists out there who prefer components out of sight. We'll reserve official judgment though until we can go eyes-on with some extended tested. For more information, be sure to check out the full PR after the break.

Leveraging its own integrated private Wi-Fi (802.11n), the IOGEAR™ Wireless 3D Media Kit broadcasts with almost no latency and no interference from nearby wireless routers. Content can be streamed to a total of four wireless 3D receivers simplifying the process of setting up multi-room or multi-display environments with additional freedom to install displays in non-traditional locations without worrying about line-of sight placement.
The Wireless 3D Media Kit consists of a wireless 3D transmitter and wireless 3D receiver with various connectors including HDMI®, Component, Composite, VGA, and USB. Users can connect a Blu-ray player, DVR/Set-top Box, DVD player, Media Server, computer or even a VCR and stream the content 100 feet through the air.

A USB port on the GW3DKIT can serve as a wireless keyboard /mouse connection allowing mobile control of a home theater PC or laptop within the 100 foot 3D receiver radius. Full access to stored videos, photos and music or management of online social media or work content is a breeze when combined with an IOGEAR wireless keyboard.[1]

"There is growing interest in 3D as major display manufacturers continue developing the technology to be more affordable and compelling," says Bill Nguyen, senior marketing manager for IOGEAR. "Our Wireless 3D Media Kit serves a complementary role that allows consumers to experience 3D, HD or standard definition content with more ease than ever before."

The GW3DKIT Wireless 3D Media Kit will ship in Q1 2011, pricing will be announced soon.

For more information on IOGEAR and its connectivity solutions, please visit: iogear.com. Follow IOGEAR on Twitter, the company blog, and become a fan on Facebook for additional industry, company and product details.

In this article: 1080P, 3d, 60hz, ces, ces 2011, ces2011, GW3DKIT, home theater, HomeTheater, Iogear, IR, Wi-Fi, wireless, wireless 3d, wireless hd, Wireless3d, WirelessHd, wiring
All products recommended by Engadget are selected by our editorial team, independent of our parent company. Some of our stories include affiliate links. If you buy something through one of these links, we may earn an affiliate commission.
Share
Tweet
Share