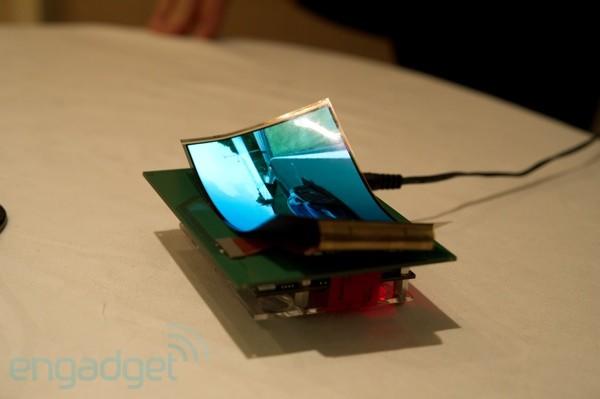 We spent a few minutes at the show this week ogling the prototype displays that Samsung's Mobile Display unit has produced over the last few months, headlined by some particularly awesome 4.5-inch flexible and 19-inch transparent AMOLEDs. Let's start with the flexible unit: Sammy seems to be particularly excited about this one, demonstrating on video that it's shatter-proof by bashing it repeatedly with a sledgehammer -- compare that to the inevitably disastrous consequences of dropping an iPhone onto concrete, and they've already won us over. Although the company still has some manufacturing challenges to overcome, commercial interest seems to be strong and they'll eventually be on the market (though not in 2011, sadly).

The picture for the transparent displays is a little murkier -- both physically and from a business perspective. Though they're not as clear as regular glass or as crisp and bright as a traditional AMOLED display, you've got to marvel at what they're doing here: full see-through color at effectively small television sizes. Interestingly, Samsung tells us that they're really close to being production-ready with these -- possibly even close than the flexible screens -- but they're still looking for business cases that'd make mass-producing them a worthwhile venture. Follow the break for some video of these bad boys, along with a 7-inch Super AMOLED that's looking Galaxy Tab-ready (and some other goodies)!

In this article: amoled, ces, ces 2011, ces2011, flexible amoled, FlexibleAmoled, hands-on, samsung, samsung mobile display, SamsungMobileDisplay, transparent, transparent display, TransparentDisplay, video
All products recommended by Engadget are selected by our editorial team, independent of our parent company. Some of our stories include affiliate links. If you buy something through one of these links, we may earn an affiliate commission.
Share
Tweet
Share