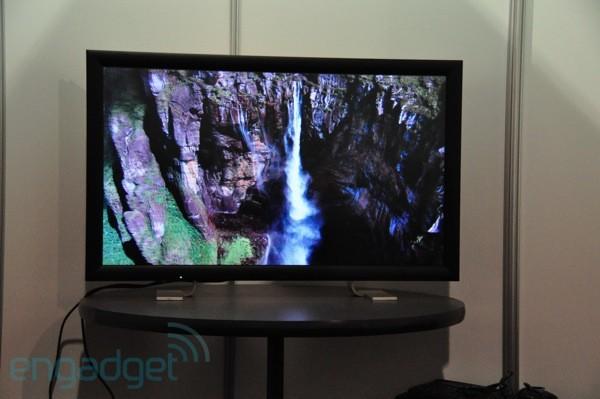 There's been no shortage of glasses-free 3D at CES but we can't say we expected Stream TV, makers of those Elocity tablets, to be showing off wares of its own. While the company is promising lots of spectacle-free TVs with parallax screens in the next year, at its booth there was just a 42-inch 1080p 3T1 panel on the show floor. We've got mixed feelings about this one; as you can see in the gallery below, the display looks very grainy and the converted HD 2D-to-3D content, while it did look three dimensional (as much as you can say), it didn't appear to be high definition by any means. However, there was one nature clip that was apparently shot in 3D, which looked incredibly crisp. Yeah, it was almost like we were watching that waterfall from a helicopter overheard. We can't say the three-dee experience is as jaw-dropping as the one provided with active shutter glasses, but it is impressive to think you don't have to wear a piece of $100 technology on your face to get images jumping into your living room. Viewing angles were actually pretty impressive -- at least in comparison to the other glasses-free 3D displays we've seen -- and tilting our head slightly didn't throw off the 3D effect too much. Steam TV is planning to release the 3T1 in May along with a 52-inch version and then 56- and 60-inch versions in September -- that will have 'em beating Toshiba to market, but we're not quite sure in quality. 12
In this article: 3D, 3D glasses-free, 3dGlasses-free, 3dTv, ces, ces 2011, ces2011, Elocity, glasses, glasses-free, glasses-free 3d, Glasses-free3d, hands-on, hdtv, HDTVs, streamtv, StreamTV Elocity, StreamtvElocity
All products recommended by Engadget are selected by our editorial team, independent of our parent company. Some of our stories include affiliate links. If you buy something through one of these links, we may earn an affiliate commission.
Share
Tweet
Share