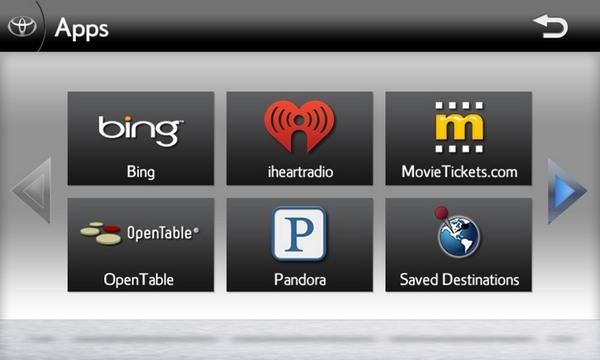 Toyota's still the biggest auto manufacturer in the world, handily trumping GM and Ford, and with the Prius celebrating its 10 year anniversary it's clear the company can certainly lead the industry when it wants to. Not so much with advanced infotainment and smartphone integration. There the company has been lagging behind the competition, Ford's SYNC and the like, but now it's making a big step forward with Entune, and it chose this year's CES to do it. Toyota was kind enough to let us run a very early demo unit through its paces. Keep on reading for our impressions. 
First, the details: Entune is Toyota's next-generation infotainment system, integrating aspects of navigation and media and other fun stuff too. Like much of the competition it's offering smartphone integration, hitting all the major bases with support for BlackBerry, Android, and iPhone. Users will need to download and install an app to their phone, which will then provide all the data the car needs -- the car itself doesn't have an onboard modem or a separate data plan you'll need to pay for.

Another nicety is that the system is said to be easily upgradeable via software update, providing some degree of future-proofing -- something that is, at this point, fairly rare in the infotainment business and a rather nice thing. However, not everything is so nice.

There are a variety of apps that work with Entune, biggest being Bing, MovieTickets.com, OpenTable, and Pandora. However, we're told that the standard apps will not be upgraded to add Entune support -- you'll need separate versions. This potentially means having two copies of Pandora installed on your phone, which if you're tight on storage is a decidedly unfortunate deal.


But, for that penalty you get a familiar interface in the apps, with Toyota ensuring the look and feel of each one will remain consistent with their non-Entune versions, rather than taking the approach of trying to make them all fit in with the car's interface design aesthetic.

It's worth noting that much of an individual app's functionality will be disabled while driving, something we weren't able to experience in our decidedly stationary demo, but reassuring for those concerned about driver distraction. Still, we didn't feel the touch-based interface to be particularly driver friendly regardless, which huge expanses of wasted space that could instead be turned into bigger buttons.

Entune is due out on "select models" sometime this year, but Toyota isn't saying which models nor whether we'll have to pay extra for the privilege. Given it integrates nicely into the company's touch-based navigation system we'd guess that is a requirement, but also hoping the added cost is low (or null). Given that the Prius is one of the most techie cars from the Company we'd be rather surprised if it didn't appear there -- perhaps in that new MPV model coming up.
In this article: ces, ces 2011, ces2011, entune, feature, featured, features, hands-on, infotainment, smartphone integration, SmartphoneIntegration, telematics, toyota, toyota entune, ToyotaEntune, video
All products recommended by Engadget are selected by our editorial team, independent of our parent company. Some of our stories include affiliate links. If you buy something through one of these links, we may earn an affiliate commission.
Share
Tweet
Share