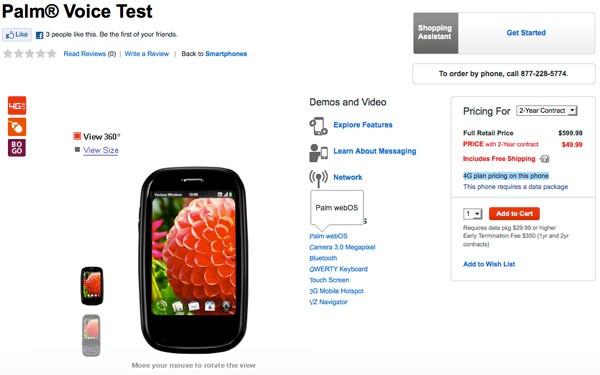 See that image above? It's not a forthcoming Palm LTE phone for Verizon Wireless, but it could be a sneak peek into Big Red's plans for the future. If you'll recall, VZW's CTO Tony Malone hinted last week at CES that integrated LTE voice + data wouldn't come until 2012 or 2013 at the earliest, and for now, all LTE devices would be relying on 3G for voice and 4G for data. Heck, not even all of the first-wave LTE devices will support simultaneous 4G data + 3G voice. Of course, we all know that LTE voice is coming eventually, and a new test portal at Verizon's official website may be a clue as to how things will be arranged once it's live. We're guessing that an admin simply populated this page with information and images from the standard Pre Plus page -- there's no way an LTE-enabled Pre is planning to slink into VZW's lineup -- but it's pretty obvious that at least someone within the company is thinking about a world where voice calls are completed over LTE. Potentially more interesting is the "4G plan pricing on this phone" line -- during Verizon's second LTE presser at CES, none of the executives on stage would talk dollars and cents, but this makes it fairly clear that there will definitely be separate plans for 4G phones, most likely ones with higher prices. Feel free to hit the source link if you'd like to poke around, but we wouldn't expect it to remain online for much longer. One more look is after the break.

Update: As we predicted, the page has been pulled. Good thing the important bits are right here for you and yours.

In this article: 4g, 4g lte, 4gLte, calling, communication, communications, lte, lte voice, LteVoice, palm, palm LTE voice, palm voice test, PalmLteVoice, PalmVoiceTest, pre plus, PrePlus, smartphone, verizon, verizon wireless, VerizonWireless, voice, voice calling, voice test, VoiceCalling, VoiceTest
All products recommended by Engadget are selected by our editorial team, independent of our parent company. Some of our stories include affiliate links. If you buy something through one of these links, we may earn an affiliate commission.
Share
Tweet
Share