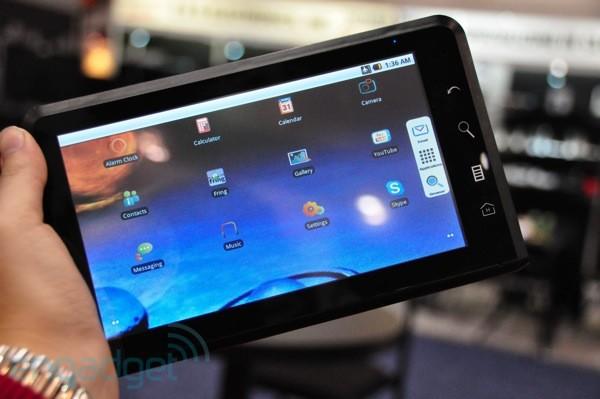 It's baaack! Yep, that up there is Augen's next version of its Gentouch 78 (you know, the Kmart tablet) -- henceforth known as the Gentouch Latte. But Augen isn't stopping there, it has a few more tablet treats coming, and we got a chance to check 'em out in Vegas. Hit the break for the lowdown on the company's four new tablets and don't forget to stop on by the gallery below to peruse the hands-on shots.

Augen sure does have a lot brewing, but while the ideas may be interesting, the execution has to be pretty darn close to perfect for this company to compete with the loads of Android 3.0 tablets and netbook / tablet hybrids coming down the line this year. Let's hope the coffee helps...
In this article: android, android 2.2, Android2.2, augen, Augen Dolce, Augen Dopio, Augen Doppio, Augen Espresso, Augen espresso tablet, Augen Latte, Augen Latte Grande, AugenDolce, AugenDoppio, AugenEspresso, AugenEspressoTablet, AugenLatte, AugenLatteGrande, ces, ces 2011, ces2011, Dolce, Doppio, espresso, grande latte, GrandeLatte, hands-on, latte, tablet, tablets
All products recommended by Engadget are selected by our editorial team, independent of our parent company. Some of our stories include affiliate links. If you buy something through one of these links, we may earn an affiliate commission.
Share
Tweet
Share