UK government to double fines and points for texting drivers

Windows Mobile takes up roost in Windows Phone, thanks to WML project (video)

HTC HD2 gets its very own Windows Phone 7 ROM (video) 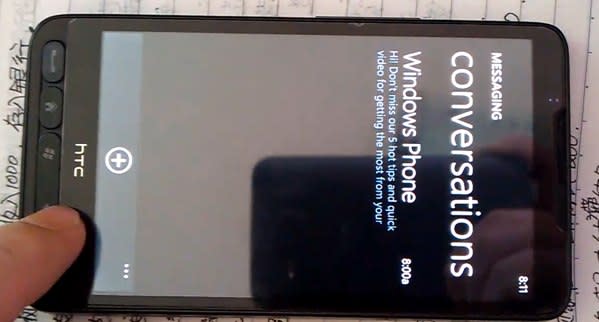 While its original OS might be yesterday's news, the 4.3 inch HTC HD2 with 1GHz Snapdragon processor still has plenty of life in it thanks to the industrious efforts of the global development community. A new Windows Phone 7 ROM has just been released by DFT (Dark Forces Team) for your flashing pleasures. While it's said to be working at nearly 100 percent, it does come with the caveat of lacking access to any Windows Live services. As such, you won't be downloading apps or media from Marketplace or setting up your avatar on Xbox Live -- pretty serious omissions for a WP7 device. Nevertheless, if you're an HD2 owner just aching for a taste of Microsoft's newest OS then now's your chance. Video of the ROM in action after the break.

Update: Well, that was fast. A video and instructions showing hacked access to Live services has now been posted. See the proof after the break.

In this article: dft, hack, hd2, htc, microsoft, rom, video, windows phone, windows phone 7, WindowsPhone, WindowsPhone7, wp7
All products recommended by Engadget are selected by our editorial team, independent of our parent company. Some of our stories include affiliate links. If you buy something through one of these links, we may earn an affiliate commission.
Share
Tweet
Share