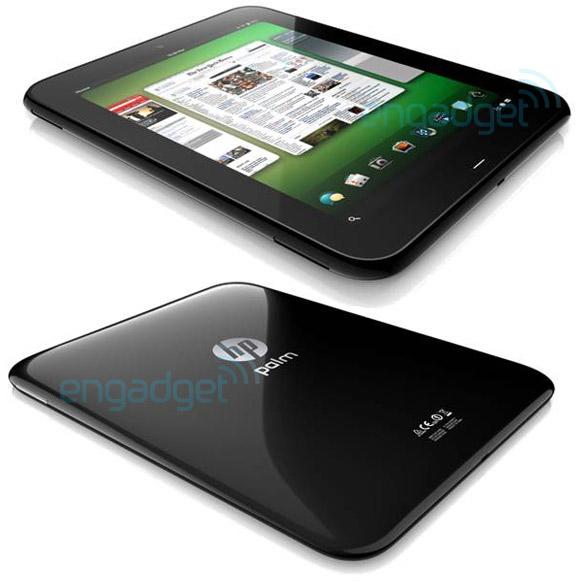 Now that the kitty's out of the gemstone bag, we're slowly starting to connect the dots that obscure the details of Palm's soon to be announced "Topaz" and "Opal" tablets. First up is information from one of our original trusted sources who claims that the Opal will measure 180 x 144 x 13mm (making it a bit shorter and wider than the 190.1 x 120.5 x 12-mm Galaxy Tab) and feature a 1,024 x 768 pixel TFT LCD display. We're told that the bigger Topaz tablet will ship about three months before Opal and measures in at 241 x 190 x 13mm (making it nearly identical to the 242.8 x 189.7 x 13.4-mm iPad) with a pixel resolution that could be the same as the Opal (our source wasn't 100 percent on this). We're also hearing that the "premium audio" we saw on that leaked marketing slide will indeed be powered by HP's Beats audio processing, and that the tablets will be provided with "tens of gigabytes" of cloud storage -- so much that it dwarfs the local storage on the devices. Good, because you're going to need it from the looks of some additional information we just received. Click through for the detail.

Our HP / Palm webOS tablets exclusive prompted a tipster (who wishes to remain anonymous) to send us a consumer survey conducted very recently by GfK Custom Research North America, a company HP has used before (Google it) to gain insight into consumer interests. While the survey doesn't mention Palm or HP by name, it's rife with trademarked terms like "Synergy" used in the descriptions of the "different things this new tablet computer can do." In other words, the features described already exist in the tablet(s) and the survey is attempting to gauge interest, presumably in an attempt to fine tune the promotional materials and marketing approach. One such feature mentioned is "Touchstone," where the survey asks the respondent how interested they are in a programmable wireless charging dock that transforms the tablet into an alarm clock, digital photo frame, and GPS unit -- sounds like webOS 2.0 Exhibition to us. This is corroborated by a trusted source who confirmed to us that inductive charging will, in fact, be a feature of the HP / Palm tablets.

The survey also mentions "Tap-to-Share." A feature that lets users easily transfer a website, document, or song from the phone to the tablet (or vice versa) simply by tapping the two devices together -- something previously hinted at in the last bullet on this slide which describes an ability to seamlessly move app and content experiences from phone or PC to slate. We're also told that HP will be providing a huge amount of cloud storage for webOS devices, and that apps, app states, and saved documents may even be able to run from the cloud -- if it's true, you'll be able to seamlessly switch from device to device with no interruption, just like our continuous client proposal. The ultimate goal, we're told, is to make the "laptop the new desktop" and for consumers to leave them sitting at home while they take tablets on the go.

The detail that nearly closes the loop of confidence for us is the mention of the tablet's "professional-grade sound" which jibes with the "premium audio" feature we already heard about -- a feature that our sources say will almost certainly be powered by (and branded with) HP's Beats audio collaboration. Mind you, we can't (yet) say for sure that the features mentioned in the survey are coming, but they do align nicely with everything that we've heard.

Other features we should expect, according to the survey:

Our tipster also says that the company will launch handsets (note, more than one), but he claims that what he's seen is "nothing too amazing" -- disappointing if true, but we won't know for sure until HP's February 9th webOS event. Excited? We certainly are. Let's just hope these devices ship sooner rather than later.