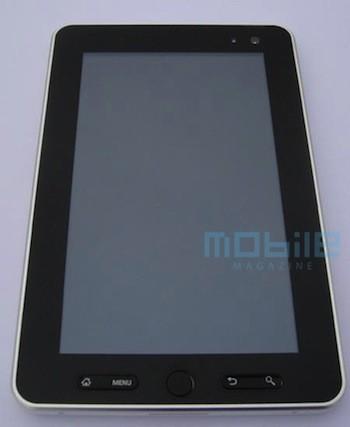 After seeing Android tablets galore at CES, it seems strangely fitting that a device bearing the CherryPad moniker could top off this month's tablet news dog pile. Specifically, Mobile Magazine is sharing "unconfirmed details" about a new 7-inch Cherry-branded tablet that's said to run Android 2.2 "at a minimum" and feature a 1024x600 capacitive multi-touch display, front and rear three megapixel cameras, a 1GHz Cortex A8 cpu, and either 8 or 16GB of flash memory. Other goodies on the sequel's spec list include an integrated HDMI output, accelerometer, microSD slot and even an unlocked GSM antenna. Unfortunately, these enhancements won't be available at the old CherryPad's $200 price point -- which was pretty much the only thing the original had going for it. Instead, the new device is rumored to cost $300 to $400. The same source also reports that an official announcement is expected in just a few weeks, so in the meantime, we'll pass the hours debating whether it makes more sense to name tablets after fruits or rocks.
In this article: 1 Ghz, 16gb, 1Ghz, 8gb, accelerometer, android, android 2.2, android tablet, Android tablets, Android2.2, AndroidTablet, AndroidTablets, capacitive, capacitive touchscreen, CapacitiveMultitouch, CapacitiveTouchscreen, cherrypad, CherrypadAmerica, cherrypal, Cortex A8, CortexA8, front facing camera, FrontFacingCamera, GPS, gsm, HDMI, hdmi out, HdmiOut, leak, leaks, microsd, rear camera, RearCamera, rumor, tablets, unlocked
All products recommended by Engadget are selected by our editorial team, independent of our parent company. Some of our stories include affiliate links. If you buy something through one of these links, we may earn an affiliate commission.
Share
Tweet
Share