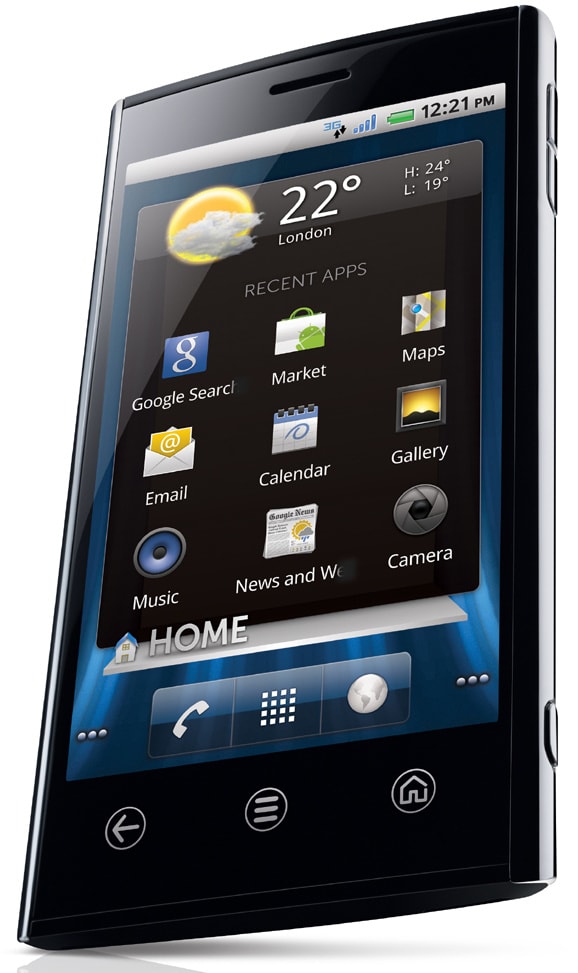 Yes, it's the Dell Venue, and no, you still can't buy one outside Hong Kong or South Korea just yet. All we can speculate is that this Android phone is facing the same manufacturing issues as its WP7 cousin, but hopefully we're wrong. Anyhow, what matters is that we've finally gotten our hands on a retail unit of the Snapdragon-packing Venue. So is it worth the wait for Androiders distanced from the Far East? And will this handset be the answer for our love-hate relationship with the Streak? Head on right past the break to find out. How would you rate the Venue?
We want to hear what you think. Post a quick review now to join the conversation!
Write a review

It's hard to deny that Dell's come a long way with the styling of its mobile devices, evolving from the cheap-looking Axim Windows Mobile PDAs (although the X50 series received much love from the community) to the now eye-catching Venue duo. Like the Streak, we've had people inquiring us about or at least eyeing at our Venue -- we're guessing it's mostly to do with the rounded chrome sides contrasting the black body, and the vibrant 4.1-inch AMOLED screen certainly helps as well despite its low visibility under strong daylight. Upon closer inspection, you'll also notice the subtly curved "Shear Design" Gorilla Glass -- which is also featured on the Venue Pro -- that covers practically the entire face of the phone, thus contributing towards the Venue's premium look no matter what angle you look at it from. Funnily enough, Dell didn't place much emphasis on the Shear Design's ergonomic benefits, but some of us feel that the curvature makes our thumb-swiping gesture slightly more comfortable. Maybe it's just us.


On a related note, the Venue's rounded sides and curved back also provide better grip, although there have been a few occasions when our naughty fingertips slipped around the back far enough to interfere with our touch input, especially when we're lying in bed. Looking back at our other phones for a sanity check, we realised that their sharper edges along the screen are actually pretty effective at stopping our fingertips from accidentally touching the screen; whereas the Venue lacks such "feature" to warn our fingers. Ah well, guess we have to sacrifice a little for the looks.

Going back to the glass: despite our careful handling and short ownership so far, our Venue's screen has somehow managed to accumulate a couple of light scratches. It sure was a surprise given the Gorilla Glass' impressive performance in our previous torture test -- perhaps our travel through the different climates of Hong Kong, Las Vegas and London made the material more vulnerable. We've written to Corning to see whether this is a possibility, so watch this space for an update.

Also noticeable at a close distance is the uneven finish on the chrome sides -- slowly tilt them lengthwise under a spot of light and you'll see small ripples running along them. That said, these are hardly noticeable from everyday usage, but we have a feeling that certain design houses like Apple and Nokia would frown upon this seemingly minor flaw. Regardless, we shouldn't complain too much -- HK$3,999 (US$514) isn't bad for a Froyo HSDPA smartphone that packs a 1GHz Snapdragon, 1GB ROM, 512MB RAM, a good quality 8 megapixel camera (we'll come to that later), and a 1400mAh battery that keeps us connected and entertained for a full day (with mainly 3G connection, some WiFi time, Twitter notifications, plenty of camera usage, some Internet browsing, and some music on the go). Speaking of which, we spotted an annoying bug when it comes to charging: we've never managed to charge the phone from zero percent using the wall outlet, even after leaving it plugged in overnight; yet plugging it into the computer gets it charging again, and about an hour later -- yes, just one hour -- we get full juice again regardless of the charging method. Coincidentally, we've also seen the same charging issue on the Venue Pro and the Streak as well, so here's hoping that Dell's engineers are reading this review. Of course, we haven't forgotten about one of the most important aspects of a phone: audio quality. We have no complaints about the earpiece's performance, and noise suppression isn't bad even in a noisy environment -- it takes just one or two seconds to adjust to your voice. The loudspeaker, on the other hand, gently muddles phone calls from the other end of the line, and distortion is already apparent when playing music at around 70 percent volume (and this is only Diana Krall, not heavy metal). Even the Venue's headphone mode isn't perfect -- we get a small amount of static noise when our earphones are plugged in; whereas our other phones produce a much cleaner audio through the same buds. Audiophiles need not apply here.

Update: Five days after our review was published, we noticed that something's wrong with our Venue's GPS performance -- sometimes 3G data connection just dies when we attempt to use Foursquare or Google Maps, thus forcing us to manually re-enable the connection in settings. We thought it was a one-off when we first spotted this before we posted this article, but that doesn't seem to be the case. Hopefully this is an isolated case.

If you've already taken a gander at our Streak 2.2 update review, then you've pretty much seen this all before. Straight out of the box you get the full-screen Stage UI widgets (for music, Twitter, Facebook, recent apps, contacts, and mail), quick scrolling between homescreens in the area below the widgets, a backup and restore app (for SMS, ringtones, bookmarks, apps, etc.), a sync utility to go with its Windows desktop suite (for multimedia and Outlook management; installer preloaded on the 16GB microSD card), Quickoffice suite, TuneIn Radio app (no FM radio, though), and Swype keyboard. The usual every-day apps like Music, Gallery, and Camera are of the stock flavor, and obviously you get Flash and live wallpaper support to boot. All is good here, except for the backup and restore utility: it doesn't really work. Well, it managed to restore once, but then it failed to revive the apps from the same backup after our second and third factory resets, despite the confirmation messages that said otherwise. Until Dell and Nero fix this bug, our advice is to just make a new backup after each restoration.

Even though superficially the Venue's OS is identical to the one on the Streak, we noticed that the former has no landscape mode for the homescreens. Ironically, this is quite the opposite of the portrait-less problem we had on the Streak before 2.2. But on the bright side, the overall UI has been pretty smooth for us, and perhaps that's why Dell's decided to disable homescreen rotation -- we did notice that there was a two to three-second delay between rotation on the Streak. As for benchmark performance, we got about 33 FLOPS on Linpack, 30fps on Neocore, and a humble score between 801 and 827 on Quadrant which is just behind the Galaxy S. Nothing outstanding, but nothing bad, either. Ah, now this is where it gets interesting. As mentioned earlier, the Venue comes with an 8 megapixel AF camera that doubles as a 720p camcorder, but there isn't a front-facing camera. As with the resolution, picture quality has also been given a big boost compared to the Streak -- the colors are almost spot-on even when cloudy or at night, although sometimes it requires a few shots and some tapping on the screen to get the focus just right in the dark. As far as settings go, you'd struggle to find anything missing -- have a look at our stash of screenshots of the camera app in our software gallery and you'll see a vast number of options to tinker with. Just to name a few: face tracking, macro, exposure, scene modes, color effects, auto exposure modes, and many more. In fact, there are probably too many of them on that messy menu -- we almost missed the nifty panorama mode (it stitches four shots together, and you get visual aid for aligning when shooting) near the bottom of the long list, not to mention what a pain it is having to scroll all the way down to enable or disable it at launch.

Another niggle we have is the lens cover on the battery door. It doesn't cause any problem in well-lit places, but at night, we noticed that the cover is prone to adding haze and reflections to our images, so be warned. A far more serious but less intermittent problem lies in the camcorder mode -- you'll notice that the night time clip in our sample video below suffers from two glitches early on, followed by audio and video going slightly out of sync. But since then we haven't been able to replicate this bug. Otherwise, video quality isn't bad, although it could do with a little bump in frame rate. All in all, Dell's delivered a solid phone that comes in nice package, as well as a form factor that's no doubt more tolerable for the average joe. For what it's worth, the Venue is certainly a very attractive deal (in Hong Kong, at least), especially with its relatively new OS, slick UI, and a surprisingly good camera. If Dell gets around to tweaking the charging issue, audio quality, camera app, and camcorder performance, then the Venue would pretty much be the must-have phone. Well, except we all know that it probably won't get its 2.3 update until a gazillion months later. Anyway, it'd be good enough if Dell can amend some of these bugs before the Venue lands in other countries, if ever.
In this article: android, android 2.2, Android2.2, cellphone, dell, dell stage, dell stage ui, dell venue, DellStage, DellStageUi, DellVenue, froyo, gorilla glass, GorillaGlass, mobile phone, MobilePhone, phone, review, shear design, ShearDesign, smartphone, snapdragon, stage ui, StageUi, venue, video
All products recommended by Engadget are selected by our editorial team, independent of our parent company. Some of our stories include affiliate links. If you buy something through one of these links, we may earn an affiliate commission.