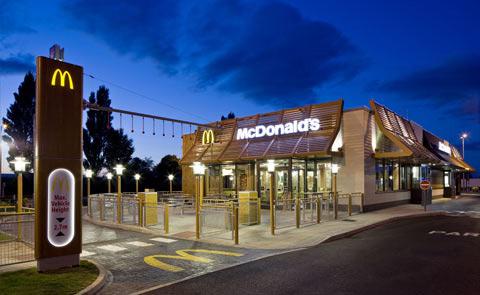 The UK already has a big old investment in contactless technology with London's rather successful Oystercard travel scheme, but now the whole Kingdom can get a taste for airborne payments thanks to a new initiative from McDonald's and Visa. The two giants of commerce are uniting to bring NFC tech to all of the former's 1,200 fast food restaurants within the UK, allowing hungry Brits to pay for meals costing up to £15 by simply waving their credit card in front of the till Obi-wan-style. Of course, the real excitement of such large-scale NFC proliferation is in the potential to use those automated tills with your Nexus S (which has an NFC chip built right in) and other devices coming up this year that look set to feature the technology. So yeah, Visa had better be working hard on putting together some mobile apps.

[Thanks, Steve]
In this article: britain, chain, contactless, contactless payment, ContactlessPayment, credit cards, CreditCards, mcdonalds, near field communication, NearFieldCommunication, nfc, payment, payments, restaurant, uk, united kingdom, UnitedKingdom, visa
All products recommended by Engadget are selected by our editorial team, independent of our parent company. Some of our stories include affiliate links. If you buy something through one of these links, we may earn an affiliate commission.
Share
Tweet
Share