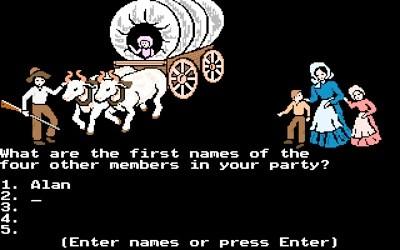 You may not have heard about it lately, but the classic game Oregon Trail is turning 40 years old this year. Initially developed as an educational game for a history class in Minneapolis, Oregon Trail was released to the public in 1971 developed for mainframe use starting in 1971, and it was later released for the Apple II computer. As an educational tool, players take on the identity of a wagon train leader bringing settlers from Missouri to Oregon in 1848, using their problem-solving skills to help their group survive disease and food shortages along the way. Points are rewarded based on how well one did at these jobs and keeping their family members alive until the end of the journey.

For fans of the game, back in August we found a clever trailer for the sweding of Oregon Trail, but for those of you looking to hearken back to a simpler time in computer gaming, you can give the game a try by either downloading the iPhone/iPod touch version from the App Store for US$0.99 or by playing the original Apple II version online at Virtual Apple.

Oops! Yes, that should have read 1971, not 1981. While the game itself was originally designed starting in 1971, the MECC Apple II version was first published in 1978. Our apologies for the confusion.

In this article: apple II, game, games, gaming, iPhone, iPod touch, IpodTouch, oregon trail, OregonTrail, retro
All products recommended by Engadget are selected by our editorial team, independent of our parent company. Some of our stories include affiliate links. If you buy something through one of these links, we may earn an affiliate commission.
Share
Tweet
Share