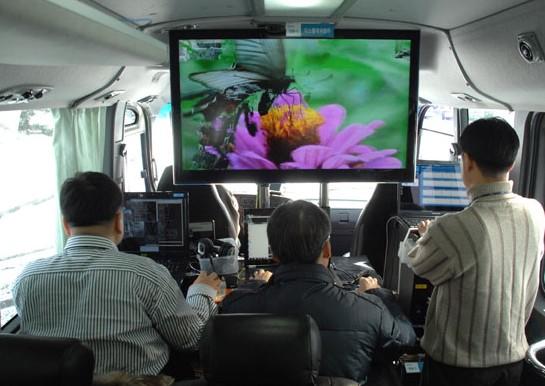 We're just giddy like kids on the way to Disney World at the prospect of LTE and WiMAX sweeping like wildfire across the country, yet someone always has to come along and be a downer by showing off something even cooler. Those kids are the players at Korea's Electronics and Telecommunications Research Institute, the same folks who brought us a Body Area Network back in 2006 and this creepy looking koala. Now they're working on LTE-Advanced, the real true 4G that delivers 600Mbps downloads. That's six times what you can ever hope to expect from LTE and 40 times faster than 3G -- enough to download a 700MB file in 9.3 seconds or stream 3D HD footage on the go, a feat those crazy cats did in their rolling man cave shown above. Sadly we have no pictures of the thing on the outside, but we're seeing antennas. Lots of antennas.

[Thanks, Andy]
In this article: 600mbps, etri, lte, lte-advanced, rv
All products recommended by Engadget are selected by our editorial team, independent of our parent company. Some of our stories include affiliate links. If you buy something through one of these links, we may earn an affiliate commission.
Share
Tweet
Share