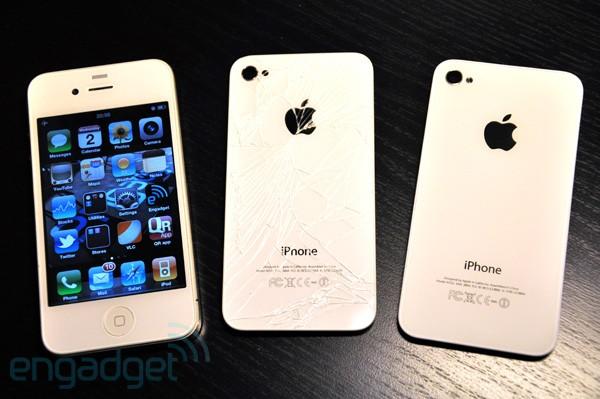 Unless you've been away from the Internet over the last few days, you would've no doubt heard about Woz's special appearance at the Engadget Show on Sunday. Unsurprisingly, a few websites ran with some quotes that they pulled from our interview -- specifically, the highlight was Woz "confirming" that the white iPhone 4 was indeed delayed due to camera issues. Well, I don't think this is the case at all. In fact, I'm sure there are plenty of other good reasons for why Apple's been delaying the much anticipated flavor of its flagship smartphone, but the camera just isn't one of them. Head right past the break and all will be explained.

Update: Our man Woz has just responded in the comments:

I said plenty to make it clear that I know nothing of Apple's reasons for rejecting anything ever. I told how when I got my white iPhone 4 assembled I tested the flash photos and they did indeed have problems. I spoke of testing flash photos versus non-flash ones and comparing flash photos between my white and black iPhones. I don't recall saying that it was a 'reason' Apple rejected the parts although I had read that.

For the last part, we were referring to 0:55 in the interview video after the break, but now that Woz has spoken, it could've been a joke at the time that got misinterpreted by some websites. They tend to do that with Woz. Read on!

As we all know, Woz was basing his analysis on the white parts he obtained from the notorious New York iPhone kid -- you may recall him making the headlines a few months back because some lawyers threatened to sue him for selling "stolen goods." So here's the problem: a lot of reports claimed that the kid sourced the parts directly from Foxconn, which is probably why Woz deduced that the parts he got were genuine rejects, ergo his aforementioned statement. As much as I love Woz, I don't think he got the right story there. In fact, no one has.

Let's start off with the kid. In a conversation I had with him a little while back, he wouldn't give me even the slightest hint of where he sourced the parts from, but I'm absolutely certain that it couldn't have been Foxconn, and not even via a third party. How so? Because I, too, have obtained white iPhone 4 parts that produced the same camera problems; but then I managed to track down some genuine Foxconn lens covers and got rid of the problem. The former in Hong Kong, and the latter in Shenzhen.

What happened was I shattered my original white back cover -- which I had since early June, before the market was flooded with KIRFs and even before the iPhone 4 was launched -- back in December, so I looked around in Hong Kong for a replacement. I was super cautious, because prior to returning to Hong Kong I had done white iPhone 4 conversions for a couple of friends, but I noticed that the parts I received were of lower quality -- some were more yellow than mine and they were definitely thinner as well. Most notably, the front covers were missing the iconic silver foil over the proximity sensor -- we've heard from early adopters that the sensor didn't work at all, so my guess is that the parts they had were fake, and the KIRF factories just couldn't replicate the same effect as the one on the real deal, so now they all come without the foil. Anyway, so yeah, I basically got screwed over by the same seller who first sold me the legit parts back in July.

There was a short supply of white parts back in December, but eventually I managed to track down a white back cover in Sincere Podium (the infamous mobile phone shopping mall that we've featured before). The guys almost sold it to me for HK$100 (US$13), but then realized that they got it mixed up with the blatantly fake ones that they also sold, so they wanted HK$380 (US$49) instead. Frankly, it looked very legit back in the shop, plus I didn't have my shattered cover with me for comparison, so I coughed up HK$380 which still wasn't bad compared to what some online sellers charge.

It was certainly nice to have an operational iPhone 4 again, but soon I started to notice the problems here and there. Firstly, the "iPhone" stamp on the back was slightly thinner than what my shattered cover had. Flip to the other side and you'd see its metallic overlay had a rougher finish pattern. Oh, and guess what? Camera problems! Not all photos were affected, but whenever I aimed at bright objects (like fluorescent tube lighting or any white object), I got a strong halo effect around them. Obviously, this poor transmittance also affected some of my close-up shots when flash was enabled. Upon a much closer inspection, I noticed that the back of this offending lens cover -- as in its black sleeve for the glue -- had a linear brush pattern instead of a circular one that the real ones have, plus the inner black circle was thicker. These telltale signs have now become a handy way for me to verify the authenticity of iPhone 4 parts that I come across.

I wasn't planning on asking for a refund from the shop, but I had to go back to Sincere Podium to hunt down more parts on behalf of a few friends anyway. Obviously, some of the shops weren't so keen on letting me do my visual inspection before making a purchase decision, but all I needed to ask was this: do their white front covers have the silver foil over the proximity sensor? All I got back from those idiots was a blank stare, as if I had just said the most ridiculous thing in the world. Eventually, they sarcastically told me to get the parts from Apple, not realizing that the real thing does indeed have the silver bit. Fools.

Gallery: Why the camera isn't the culprit for the white iPhone 4's delay | 12 Photos

A couple of test shots at the Shenzhen shop using the new lens cover.
So what was a Chinaman to do? Go north, as we always say. Luckily for me, I just so happened to be in Shenzhen to cover the Meizu M9 launch, so afterwards, Stone (our Hong Kong editor) and I went into a shady looking building where we were told would have the white iPhone 4 parts. It took us a while to scan through the hundreds of little shops there, but about half an hour later we came across a shop that had exactly what I was looking for. Well, almost -- from my visual inspection, the ¥120 ($18) white cover itself had all the ticks except for the lens cover, which had a linear brush pattern instead of a circular one on the back. I pointed this out to the boss and boom, he pulled out a bag that had what appeared to be an internal Foxconn label stuck on it, and inside were a stash of lens covers neatly lined up on a sticky sheet. And yes, they all had the right pattern on the back. All he needed was half an hour before we went back to pick up my made-to-order white iPhone 4 back cover.

Alas, after learning about the water droplet test on a Hong Kong forum, it turned out that my new white cover isn't genuine, either. The idea of the test is that the oleophobic coating on genuine iPhone 4s holds the surface tension of water droplets, so this makes a good litmus test for spotting fake parts. As you can see above, both my new cover and the bad KIRF couldn't hold up water droplets, whereas my shattered piece could. On the bright side, my front cover passed this test, and all I care about right now is that I have genuine-looking white covers that don't ruin my photos. Regardless, the argument still holds: all the rumors that have been going around about how the white iPhone 4 is delayed are untrue -- the KIRF lens covers are the real culprit of the crappy photos that people have been seeing, ergo the culprit of the erroneous rumor. The real reason for the delay? We still think it's to do with the paint job. Fret not, though, as the shop owner in Shenzhen told us that Foxconn was starting to mass produce white iPhone 4s in mid-January, but only time will tell whether his source was right.
In this article: apple, camera, comparison, debunk, diy, exclusive, fake, featured, features, foxconn, iphone, iphone 4, iphone+4+white, Iphone4, iphone4white, kirf, manufacture, mod, part, photo, photo quality, PhotoQuality, sample shots, SampleShots, shenzhen, sin tak, sincerepodium, SinTak, steve wozniak, SteveWozniak, transmittance, white, white iphone 4, white+iphone, white+iphone4, whiteiphone, WhiteIphone4, woz
All products recommended by Engadget are selected by our editorial team, independent of our parent company. Some of our stories include affiliate links. If you buy something through one of these links, we may earn an affiliate commission.
Share
Tweet
Share