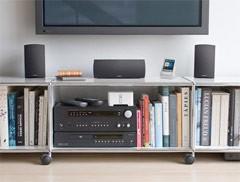 Look, we get it. You sunk $87,342.12 into a Sonos whole-home streaming solution, and your buds won't stop pestering you about its inability to stream XM Radio. Thankfully, the stars have aligned just in time for your impending Super Bowl bash, and it's just about time for you to start fantasizing about what their faces will look like when they're ushered into your adobe by Heart-Shaped Box. Thanks to the eagle-eyed Dave Zatz, it looks as if some sort of final blending has gone down between Sirius and XM, with a merging of accounts (presumably) making it possible for Sonos to now stream XM Radio; if you'll recall, the system has had the ability to stream dedicated Sirius channels for a good while now, but particular XM stations have been left out of the mix prior to this weekend. Hit the source link to find out what password changes are needed to get things in sync, and be sure to try it all out before bragging to said buds -- wouldn't want to eat crow after taking all of that flack, now would you?