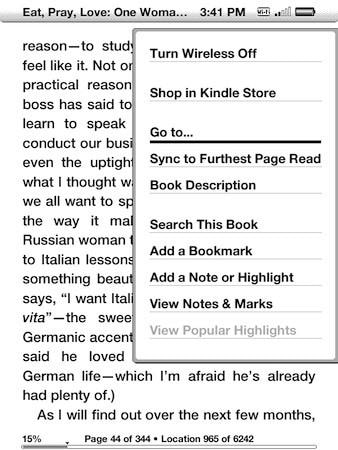 It'll still be at least a few more days before it's automatically pushed out to Kindles around the world, but those looking to get a jump on things can now download an "early preview" of software update version 3.1 for the latest generation Kindle. That update adds a new public notes feature that lets you share your notes with others and view the notes of those you follow, as well as real page numbers that match the page numbers in the print version of a book -- those have already been added to "tens of thousands of Kindle books," and will also be hitting the various Kindle apps in the "coming months." You'll also get a new layout for magazines and newspapers that gives you a quick snapshot of the latest edition, and a new "before you go" feature that lets you rate a book as soon as you've finished it and share a brief note about it on your social networks. Hit up the link below to download the update and try it out for yourself.
In this article: amazon, amazon kindle, AmazonKindle, e book, e books, e reader, e readers, e-book, e-books, e-reader, e-readers, firmware, firmware update, FirmwareUpdate, kindle, kindle 3g, kindle wi-fi, Kindle3g, KindleWi-fi, software update, SoftwareUpdate, update
All products recommended by Engadget are selected by our editorial team, independent of our parent company. Some of our stories include affiliate links. If you buy something through one of these links, we may earn an affiliate commission.
Share
Tweet
Share