J. Stern
February 7th, 2011
In this article: amd, amd e-350, AMD Fusion, AmdE-350, AmdFusion, e-350, fusion apu, FusionApu, laptop, Lenovo ThinkPad X120e, LenovoThinkpadX120e, notbook, review, thinkpad, ThinkPad x120e, ThinkpadX120e, ultraportable, x100e, x120e, zacate, zacate apu, ZacateApu
Most things deserve a second chance, right? Hey, if they promise improvement, we think so, and that's exactly what we're giving Lenovo's ThinkPad X120e. If you recall, the previous X100e was quite a disappointment, and that's actually putting it rather nicely -- not only did the 11.6-inch system redefine the term "lapburner," but it struggled to last 3.5 hours on a charge. It was bordering on tragic, but Lenovo's ready to right all those wrongs with the X120e. While it has kept the chassis and the wonderful chiclet keyboard unchanged, it's subbed out AMD's older Neo chip for the long awaited Fusion Zacate APU. The same platform already proved to be pretty awesome in HP's Pavilion dm1z with an almost perfect blend of power, graphics, and endurance, but does the X120e reap the same benefits? At $399 ($579 for our review unit), is the perfect, affordable ThinkPad ultraportable finally here? Has Lenovo finally gotten it right? And how does it compare to the other new Fusion affordable ultraportables or notbooks, as we've taken to calling them? We've got those answers alright – hit the break for our full review.
%Gallery-115842%
Lenovo 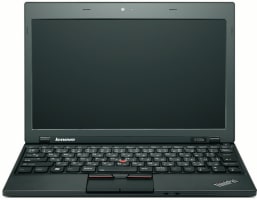 The X120e has the same exact chassis as the X100e, and considering that's what we liked so much about the original, we've no qualms with that. We prefer the matte, black plastic cover to the ThinkPad Edge's glossy, fingerprint-attracting lid and the fact that the entire thing is one uniform color. However, there's a small part of us that wishes the lid had the same soft, rubberish coating as other classic ThinkPads. Still, those that are fans of the traditional ThinkPad look will join in the appreciation of the simple, yet refined aesthetic. The all-plastic system feels as good as one would expect, and the screen hinges feel solid and don't wobble.

The X120e is slightly wider and longer than the average 10-inch netbook, but it's still incredibly portable. The 1.1-inch thick machine was compact enough to fit into our shoulder bag and leave us with plenty of spare room for our DSLR and oversized wallet. We still take a bit of an issue with the horizontally protruding six-cell battery -- it juts out the rear, which isn't only awkward, but it also puts the system at 3.3 pounds. That's still lighter than HP's 3.4-pound Pavilion dm1z, but no doubt the ThinkPad's battery is oddly placed in comparison to HP's improved battery design. The one major difference between the former X100e chassis and the X120e? The addition of a HDMI port. Other than that, the laptop is still home to three USB 2.0 ports, VGA and Ethernet sockets, a mic / headphone combo jack, and a SD card slot. The yellow colored USB port can charge your gadgets even the system is powered down.

The X120e has the same keyboard as the Edge 11 and the X100e, and our extreme love for the black, matte curved keys is stronger than ever. As we've said many times before, it feels as if the keys have been molded especially for our fingertips and the deck itself doesn't have any flex or noticeable bend. Writing the brunt of this review on the panel itself didn't require us to shift our usual hand position too much, either -- the function row has been shrunken down, but there are two full sized Shift keys.

Like the X100e, there's no lack of ways to push around the cursor on the X120e -- there's the signature red TrackPoint (or nub) smack in the middle of the keyboard, and a smaller 3.0 x 1.5-inch touchpad below. We still prefer the pointing stick, but the touchpad is decent for navigating as well. It's smaller than that on the dm1z, but it does have two dedicated buttons rather than those sometimes-frustrating integrated button ClickPads. That said, the multitouch gestures on the HP system seemed more responsive, and while two-finger scrolling on the ThinkPad works, it's jittery in comparison.

Thankfully, Lenovo's also kept the matte 11.6-inch, 1366 x 768-resolution display untouched. Cutting out the sometimes distracting glare of glossy displays, the matte screen is still sufficiently bright and horizontal viewing angles continue to be better than vertical ones. Tilting the screen back to about 40 degrees caused a bit of color distortion, but it didn't really prove too problematic when watching the Rango trailer with the X120e on our lap. The webcam on the top of the bezel is still optimized for low-light situations. That still creeps us out just a bit, but it did work quite well when we turned down the lights -- our face was still pretty clear to our friend on Skype. The speakers on the front lip of the laptop were quite loud at full blast, and while they were fine for hearing that call and Jon Stewart's voice in a Daily Show clip, listening to Wiz Khalifa's "Black and Yellow" was fairly tinny.

Just like the Pavilion dm1z, the ThinkPad X120e is powered by AMD's dual-core 1.6GHz E-350 processor, though it has 4GB of RAM compared to the HP's three gigs. (There entry level $399 X120e will have a single-core E-240 CPU, 1GB of RAM, and three-cell battery.) The benchmarks below prove much of what we already knew about AMD's Fusion Zacate – it absolutely wrecks the previous Neo platform and Intel's Atom on performance, while handily beating Intel's integrated graphics. Those high numbers also translated to really peppy everyday performance. There's no doubt that the system just felt faster than any Atom netbook or Neo-powered system we've used. The machine kept up with us as we wrote this review in Microsoft Word Starter 2010, had over eight tabs open in Chrome (one of them being Pandora), and simultaneously ran TweetDeck, Trillian, Skype, GIMP, and Windows Media Player in the background. Even when we threw a 1080p clip into the mix, the system remained really responsive. Similar to the dm1z, we saw a bit of lag when we tried to install a large file like Batman: Arkham Asylum, but you can always pull out the 320GB, 7,200rpm hard drive and throw a SSD into this sucker. Sure, it'll cost ya, but can you really put a price on faster install and launch times?

Of course, that processing power is coupled with some really nice graphics on the same chip, and as we mentioned AMD's Radeon HD 6310M core absolutely trounces Intel's GMA 3150 netbook and GMA 4500 ULV graphics solutions. Similar to the dm1z, it scored a couple hundred points less than some netbooks with NVIDIA Ion 2, but when it came to doing normal graphics intensive stuff we couldn't tell the difference. Streaming and local high-def video were no challenge for the little system even when output to a 42-inch HDTV using ASUS's WiCast. We should note, that we encountered a "video card" error when we tried to play a 1080p .mov file in Windows Media Player – HD .wmv files played fine in the Microsoft program, but we had to download VLC Player to get the .mov clips working. Lenovo's looking into that issue, but we assume it's driver related as we didn't have that issue on the E-350-powered dm1z. We also noticed some 1080p YouTube videos turning the screen green when we went to play them at full screen. Playing 720p YouTube clips at full screen didn't result in the same issue, so we assume that it's another AMD driver related issue. As for gaming? We saw the same sort of experience as the dm1z -- in WoW: Cataclysm, our gnome was prancing and jumping around the screen at 27fps with the resolution set at 1024 x 768. And Flash games, like Canabalt, sailed along.

Update: Lenovo sent us a BIOS updated which fixed the 1080p .mov video playback issues. The X120e should be shipping with this new software.

So, the X120e gains some performance, but has Lenovo improved those real pain points – battery life and thermals? Yes and yes! While the X100e only lasted for three hours and 27 minutes on our video rundown, which loops the same standard definition clip with brightness at 65 percent and WiFi turned on, the X120e's 57Whr six-cell battery ran for four hours and 56 minutes. Yep, that's a good extra hour and a half more. In our regular everyday use – writing this review, surfing the web, and chatting with coworkers – we were able to squeeze out about five hours and 45 minutes. It's not as much as a netbook, but given the extra power we think it's probably worth the slight hit for most people, and hey, it's still enough juice to let you keep the AC adapter home without worrying when you head out to the coffee shop for the day. Either way, it beats the absolutely stunning Lenovo IdeaPad U260's rather embarrassing two hours and 56 minutes. Man, we wish that thing had a bigger battery and a slice of AMD's Fusion.

Remember when the X100e made our jeans feel like we had just taken them out of the dryer? Well, the X120e does no such thing. The palmrest and underside of the system stayed quite cool during our long periods of use. However, much like the dm1z, the left vent seemed to be working overtime and made a noticeable sound. We guess we'll take that over burning temperatures any day.

The X120e we reviewed booted a very clean Windows 7 Professional (64-bit) desktop. Other than the Recycling Bin, Lenovo kept it largely pristine, though its ThinkVantage tools – its Power Controls, Internet Connections, etc. -- are buried throughout the OS. We tend to prefer the stock Windows 7 tools for connecting to WiFi or adjusting power settings. Other than its own software, there aren't too many traces of third-party programs, though there is a "Free Skype voice and video calls" shortcut in the Start menu that launches a Skype install. That didn't bother us much since we were just going to install it anyway.

It's a good thing we believe in second chances, eh? The X120e is without a doubt an improvement over the X100e in terms of battery life, thermals, and performance, and considering we've always loved its classic looking chassis and amazingly comfortable keyboard, we're obviously pretty taken with the affordable little laptop. But the real question: do we like it better than HP's dm1z, which is priced around $450? That's a tough one, but when it comes to value, there's no doubt that HP's dm1z is the better choice – it has virtually the same specs as the ThinkPad (okay, one less gig of RAM and Windows 7 Home Premium), but comparable performance and battery life for $100 less. We assume for that reason alone many will snatch up the HP, however, if you're looking for something a bit more professional looking combined with some great ergonomics, the X120e may just be worth the extra cash.
All products recommended by Engadget are selected by our editorial team, independent of our parent company. Some of our stories include affiliate links. If you buy something through one of these links, we may earn an affiliate commission.