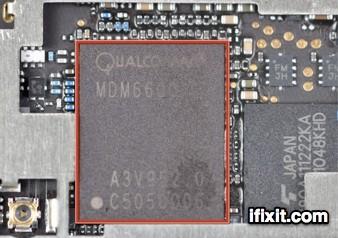 A lot of the anticipation and/or naysaying about the Verizon iPhone has focused on CDMA, the somewhat less travel-friendly and slower network standard that Verizon uses. GSM covers a lot more countries, including all of Europe, and in the US the AT&T data speeds are testing noticeably faster -- of course, if you can't get or keep a signal, faster data does you precious little good.

Some iPhone watchers were hoping for a dual mode phone like the Droid Pro, which features an antenna chip (the Qualcomm MDM6600) capable of handling both kinds of networks. That chip, combined with an auxiliary SIM slot for device identification and a secondary antenna, could have allowed the Verizon iPhone to roam from continent to continent at will.

As we now know, the real-world Verizon iPhone is not a dual mode device; it's CDMA only, leaving us to hope that the next iPhone will be truly universal hardware for any and all carriers. There is a catch, though; today's thorough iFixit teardown revealed that the Verizon unit actually is using the MDM6600 chip, which would have theoretically allowed Apple to build out a GSM antenna in this version.

Lacking the SIM slot and the GSM antenna, however, the current Verizon iPhone is decidedly not dual-ready. iFixit mused that the extra effort and space required for a second antenna may have put such a device out of reach for this cycle; however, since Apple is already using the required universal chip, the signs point even more strongly to an iPhone 5 that bridges the gap.

In this article: cdma, droid pro, DroidPro, gsm, ifixit, iPhone, qualcomm, verizon iphone, VerizonIphone, world phone, WorldPhone
All products recommended by Engadget are selected by our editorial team, independent of our parent company. Some of our stories include affiliate links. If you buy something through one of these links, we may earn an affiliate commission.
Share
Tweet
Share