Apple could be delaying HomeKit by a couple months (Update: Nope) 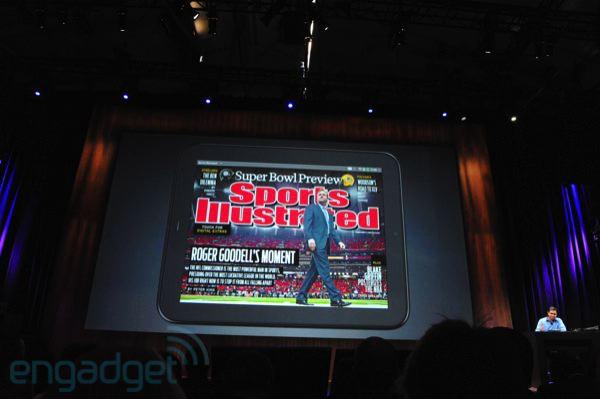 Time Inc. has been trying to work out a deal on tablet magazine subscriptions for some time now, and it's just made a fairly big move in that direction with the help of HP. It confirmed at its "Think Beyond" event today that it has teamed up with the publisher to offer subscriptions to some of its magazines on the TouchPad when it launches this summer. That will apparently include Sports Illustrated, Time and People initially, with Fortune and other Time Inc. titles to follow further on down the road, according to AdWeek. Still no word on pricing, but HP promises they'll deliver an "immersive reading" experience.

Update: Palm's Lisa Bewster has confirmed via Twitter that this deal also involves Time getting its big wish: subscribe to the print magazine and you'll get full access to the tablet version.

For more on all of HP's webOS announcements today, click here!
In this article: fortune, hp, hp palm, hp touchpad, hp webos, HpPalm, HpTouchpad, HpWebos, magazine, magazine subscriptions, magazines, MagazineSubscriptions, palm, people, slate, sports illustrated, SportsIllustrated, tablet, think beyond, ThinkBeyond, time, time inc., TimeInc., touchpad, webos, webos 2.2, webos 3.0, Webos2.2, Webos3.0
All products recommended by Engadget are selected by our editorial team, independent of our parent company. Some of our stories include affiliate links. If you buy something through one of these links, we may earn an affiliate commission.
Share
Tweet
Share