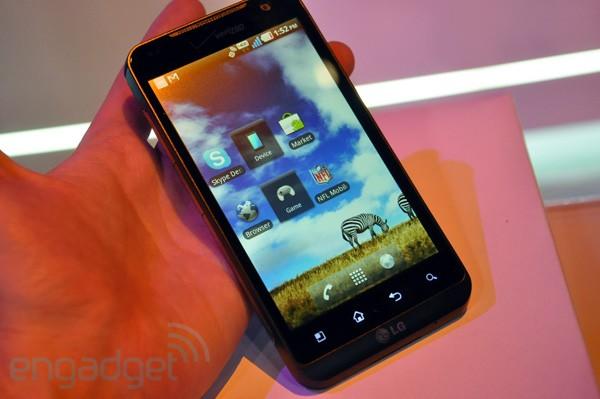 Verizon has just announced that it has completed the first voice over LTE (VoLTE) call on a commercial network anywhere in the world today, a 33-second dialogue between employees on LG Revolutions in the company's headquarters in Basking Ridge, New Jersey, following it up with a number of other calls where staffers were able to talk and use data services simultaneously -- thanks in no small part to the fact that LTE treats voice just as it treats any other type of data. We'd initially gotten the impression yesterday that Verizon would be starting to roll out voice over LTE (VoLTE) with the Revolution in mid-2011, but the company's press release today is saying that they'll be working to "enhance" the VoLTE experience in 2011 with commercially availability now expected next year. High-fidelity calls are expected to be part of that experience, so it'll be harder than ever to hold a call when you've got a bad cold. Remember the throat lozenges, alright? Follow the break for the full press release.

BASKING RIDGE, N.J. – Verizon Chief Technology Officer Tony Melone has confirmed that the company's technologists placed a live, IMS-based VoLTE (Voice over LTE) call over its commercial network on Wednesday morning. This takes VoLTE calling from a lab environment to a commercial network for the first time anywhere on the globe.

The initial call was placed at 9:54 a.m. ET Tuesday, Feb. 8, 2011 by Balaji Raghavachari, manager of technology for Verizon Wireless, using a LG Revolution 4G smartphone. The call originated at Verizon headquarters in Basking Ridge, N.J. and was received by Sanyogita Shamsunder, director of technology for Verizon Wireless, who was also on a LG Revolution 4G smartphone in Basking Ridge. The initial call was 33 seconds in duration. During additional calls made that morning, the technologists were able to browse the Web and use other data services while participating in voice calls.

Melone said, "Today is another proof point that the LTE ecosystem is alive, healthy and thriving. VoLTE will quickly become the global standard for delivering voice over LTE networks."

"The GSMA launched a voice over LTE initiative a year ago with the aim of driving a single, industry-wide solution for voice and messaging services via IP," said Alex Sinclair, chief technology officer at the GSMA. "We commend Verizon Wireless for helping to make this a reality by conducting the world's first voice call over a commercial LTE network. The progress made by the GSMA, its members, and in particular Verizon Wireless, to enable this functionality will play a crucial role in driving strong momentum and vast economies of scale for LTE all over the world."

Subsequent test calls lasted more than 10 minutes. Technologists browsed the Web, participated in chats and downloaded applications from the Android Market™ while on a voice call. The LG Revolution smartphones were running on the Android 2.2 platform.

Verizon Wireless plans to enhance VoLTE with rich communications services and optimize performance on its commercial 4G LTE network during 2011. Commercial services are expected to be available in 2012.

Verizon will showcase IMS-based VoLTE calls over a demonstration network in its booth (Hall 8, stall 8C55) at GSMA Mobile World Congress in Barcelona, Spain, next week. For more information about LTE, visit www.verizonwireless.com/LTE.

In this article: 4g, lg, lte, revolution, verizon, verizon wireless, VerizonWireless, voice, voice over lte, VoiceOverLte, volte, vzw
All products recommended by Engadget are selected by our editorial team, independent of our parent company. Some of our stories include affiliate links. If you buy something through one of these links, we may earn an affiliate commission.
Share
Tweet
Share