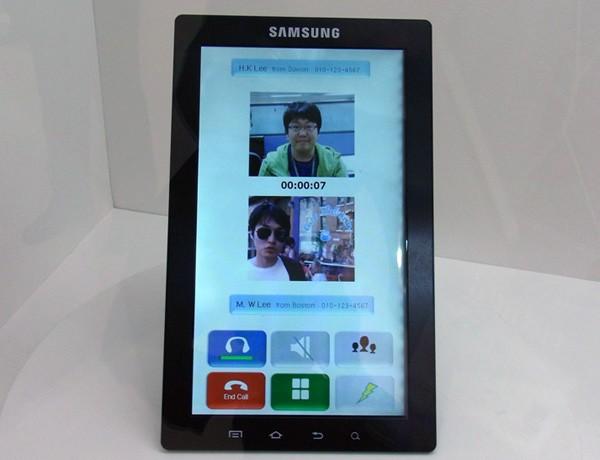 Samsung's MWC 2011 presentation is this Sunday, at 6PM Central European Time (midday for those on the American east coast). We already know it will feature a dual-core evolution to the Galaxy S smartphone and we know for a fact there'll be at least one new tablet on show. Pocket-lint is today filling in some details about said Tab successor by identifying it as a 10.1-inch Android 3.0 device. That means Samsung is stepping right up to Motorola, whose Xoom still looks likely to be the first Honeycomb tablet to ship, and saying it can do better. It might just be able to do it, too, as the new and unnamed Tab is said to be physically smaller than Apple's iPad in spite of having a slightly larger display. Somewhat less believable is the mention of a dual-core Qualcomm processor as the thing to power Samsung's new tablet -- can you really see Samsung undermining the future success of its Orion / Exynos chip by using a competitor's hardware? Then again, weirder things have happened.
In this article: 10-inch, android, android 3.0, android tablet, Android3.0, AndroidTablet, galaxy tab, galaxy tab 2, GalaxyTab, GalaxyTab2, honeycomb, mwc, mwc 2011, Mwc2011, rumor, samsung, slate, speculation, tab, tab 2, Tab2, tablet
All products recommended by Engadget are selected by our editorial team, independent of our parent company. Some of our stories include affiliate links. If you buy something through one of these links, we may earn an affiliate commission.
Share
Tweet
Share