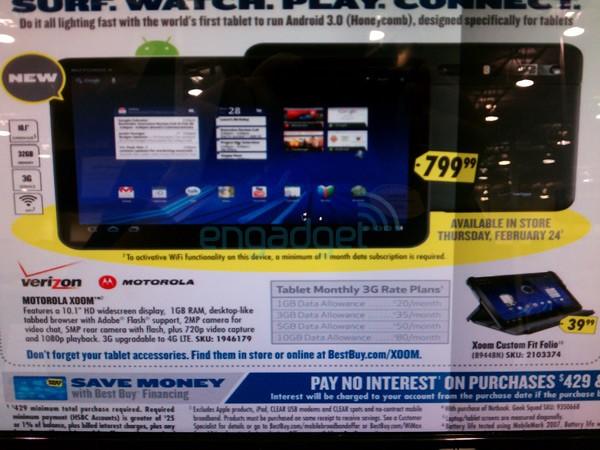 The evidence for a Motorola Xoom launch on February 24th just became that bit more compelling, courtesy of this here Best Buy ad. It promises Moto's Android tablet will be in stores a couple of weeks from now, decorated with a daunting $799.99 sticker. That price agrees with one of our earliest leaks on the matter, purportedly from Verizon's own systems, so all the pieces seem to be falling into place for a pretty exciting end to February for Android fans. This flier also has some data tariffs on it, starting at $20 per month for a 1GB allowance and stretching up to a 10GB limit for $80 (identical to VZW's pricing with the Galaxy Tab). Doesn't really sound like the most appealing proposition we've ever heard, but maybe if those prices remain static once the Xoom gets its 4G upgrade, we could learn to love them.

In this article: ad, advert, android, best buy, BestBuy, commercial, date, exclusive, honeycomb, leak, moto, motorola, motorola xoom, MotorolaXoom, price, priced, pricing, tablet, verizon, verizon wireless, VerizonWireless, vzw, xoom
All products recommended by Engadget are selected by our editorial team, independent of our parent company. Some of our stories include affiliate links. If you buy something through one of these links, we may earn an affiliate commission.
Share
Tweet
Share