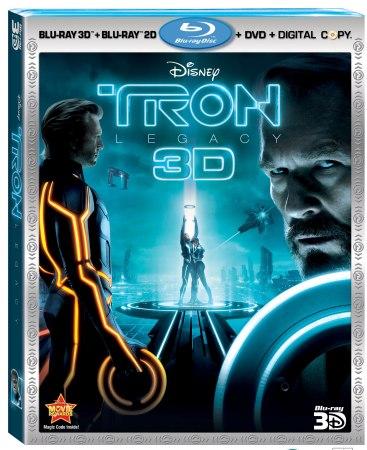 Amazon already revealed the three different Tron: Legacy Blu-ray & Blu-ray 3D combo packs on the way, from the 2-disc standard edition to the two movie, 5-disc Identity Disc-packaged limited edition but now we know the release date (4/5/11) and info about the extras. On the disc, Blu-ray-only exclusives include the Daft Punk music video for their song Derezzed, plus Launching the Legacy, Disc Roars and The Next Day: Flynn Lives Revealed features (Tron: The Original Classic Special Edition saves a Photo Tronology just for Blu-ray watchers.) If you have an iPad, the Disney Second Screen app that will make its debut alongside Bambi March 1 adds to the action with 360-degree views of the Tron vehicles, interactive progression reels and other information all synced to the movie by the audio track. There's more details including MSRPs ($40 - $80) and the press release after the break.

TRON: THE ORIGINAL CLASSIC SPECIAL EDITION TO ALSO DEBUT FOR THE FIRST TIME ON BLU-RAY

Sure to light-up fans this Spring, TRON: Legacy providesconsumers with the ultimate Hi-Def Blu-ray experience with breathtaking 1080p visuals and superior 7.1 surround sounds that bring to life the visually stunning world of TRON. Taking you further behind the grid, are also in-depth bonus features on the making of the film (i.e., creating the futuristic vehicles and world of TRON, storyline mythologies, actors/characters and more) and the all-new Disney Second Screen interactive experience.

Disney Second Screen transforms the movie watching experience by allowing viewers to explore the story behind the film perfectly synched on a second device, like an iPad™ or laptop, without interrupting their enjoyment of the movie. By simply accessing the Disney Second Screen companion application on their Internet-connected device, consumers are able to dive deeper into the film by engaging with elements including 360-degree vehicle turnarounds, interactive progression reels, and more. Disney Second Screen directions and access codes can be found inside the Blu-ray Disc packaging.Audio synching is powered by TVPLUS.

The original motion picture score for TRON: Legacy, released by Walt Disney Records on December 7, 2010, was composed and produced by the iconic and critically acclaimed Grammy® Award–winning French duo Daft Punk. The album peaked at No. 4 on The Billboard 200 and was the highest charting score soundtrack in over a decade. Walt Disney Records will be releasing TRON: Legacy RECONFIGURED, an album featuring 14 remixes of the original motion picture score on April 5th.


TRON: THE ORIGINAL CLASSIC SPECIAL EDITION
FACT SHEET
Film Synopsis: Experience the original landmark motion picture that inspired a new generation of digital filmmakers and became a favorite of fans and critics across the world. Relive the electrifying thrills of TRON with an all-new, state-of-the-art digital restoration and enhanced high-definition sound.

When a brilliant video game maker named Flynn (Jeff Bridges) hacks the mainframe of his ex-employer, he is beamed inside an astonishing digital world and becomes part of the very game he is designing. Complete with never-before-seen bonus materials, it's an epic adventure that everyone will enjoy!