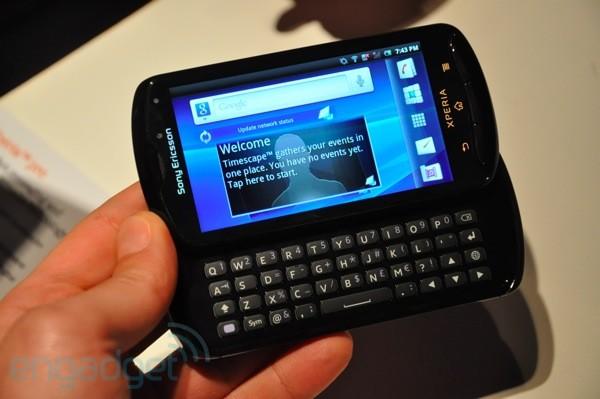 Amazing! Sony Ericsson actually managed to keep something secret from us. The Xperia Pro is the one handset from its MWC presser today that wasn't known about in advance, but we're damn happy to see it anyhow. It features a well-spaced QWERTY keyboard that slides out much in the same way as the gamepad would on the Xperia Play. We did notice there were some software issues on our demo devices -- the Sony Ericsson-customized Android 2.3 installation was nowhere near as smooth as what we've seen on the Xperia Arc previously, so maybe SE will need a bit more time to fashion out its software here. Physically, the Pro is compact and seems decently well built -- we did find the oddly placed power button and teeny tiny volume controls a bit of a bother to locate and operate, however. Obviously, this is a big step up in size from the Xperia X10 Mini Pro, but thickness is kept mercifully in check. It doesn't feel significantly thicker in the hand than phones that lack its hardware keyboard. We'll have video of the device for you very shortly, but for now, enjoy the hands-on shots below. 26
In this article: breaking news, BreakingNews, hands-on, mwc, mwc 2011, Mwc2011, qwerty, qwerty slider, QwertySlider, slider, sony ericsson, SonyEricsson, video, xperia, xperia pro, XperiaPro
All products recommended by Engadget are selected by our editorial team, independent of our parent company. Some of our stories include affiliate links. If you buy something through one of these links, we may earn an affiliate commission.
Share
Tweet
Share