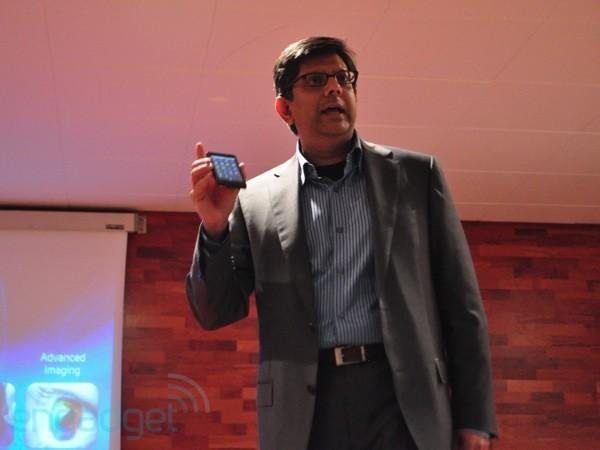 We had a feeling we'd be hearing about Intel's Atom for smartphones here at Mobile World Congress, and Intel did in fact take the stage today to talk about its forthcoming Medfield processor. The company has announced that it's starting to sample or test its 32nm Medfield processor for mobile devices with its customers (obviously, it's not telling us which ones) and more importantly that it will ship in a phone. Yep, Intel's Senior Vice President Anand Chandrasekher spoke quite firmly about how the platform will in fact ship in smartphones and that it will also support Android. He pulled out the phone above just as a proof point, and while he didn't say who made it, we have a sneaking suspicion it's that Aava Mobile phone we've heard about.

Chandraskher also took direct aim at ARM (he even called out ARM's CEO Warren East), and hammered home Intel's focus on battery life. He didn't quote an exact run time, but he did say that "on active power we are the most efficient architecture on the planet." We actually believe he repeated that it will have the "longest usage time" at least three times -- we're thinking he's serious. What about standby? He was a bit more vague on that, but did say it would be competitive there as well. We'll be doing our best to track down that Medfield-powered handset up there, so stay tuned.

Update: Our friend Chippy from CarryPad caught a bit of Anand's talk on video. Hit the break for that.

Update 2: We asked Anand for clarification on the time frame of these Medfield handsets -- he wouldn't detail that exactly, but he did say that the platform will go into production this year.

13
In this article: aava mobile, AavaMobile, Anand Chandrasekher, AnandChandrasekher, android, atom, battery life, BatteryLife, breaking news, BreakingNews, Intel, intel atom, IntelAtom, Medfield, meego, mwc, MWC 2011, Mwc2011, phone, smartphone, x86
All products recommended by Engadget are selected by our editorial team, independent of our parent company. Some of our stories include affiliate links. If you buy something through one of these links, we may earn an affiliate commission.
Share
Tweet
Share