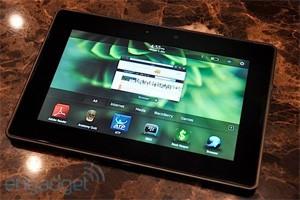 Update: RIM co-CEO Jim Balsillie was particularly chatty after the announcement of the new 4G PlayBook models. The takeaway is that RIM expects to price that BlackBerry tablet at less than $500 (WiFi-only model, presumably) -- much less with any carrier subsidies. He's also expecting to followup the Sprint deal in the US with similar signings of AT&T and Verizon Wireless. "All of our carrier partners want [PlayBook]," said Balsillie, referencing the 580 carrier partners that RIM enjoys in 165 countries. While Balsillie refused to comment on the PlayBook's rumored ability to run Android apps, he did confirm that RIM's new tablet was on track for a March or April release.

"The BlackBerry PlayBook tablet is already being widely recognized for its superior performance, rich web experience, enterprise readiness and deep support for web standards and open development tools. We are now building on the BlackBerry PlayBook's many advantages with support for additional 4G networks that will allow enhanced business opportunities for carriers and developers and unparalleled mobile experiences for users," said Mike Lazaridis, President and Co-CEO at Research In Motion.

The combination of premium hardware features and design powered by the new and highly acclaimed BlackBerry® Tablet OS and open development tools, along with support for carriers' high speed 4G networks, will provide a high performance platform that enables a mobile services revolution.

In addition to the Wi-Fi and 4G connectivity referenced above, each tablet can also support:


About Research In Motion
Research In Motion (RIM), a global leader in wireless innovation, revolutionized the mobile industry with the introduction of the BlackBerry® solution in 1999. Today, BlackBerry products and services are used by millions of customers around the world to stay connected to the people and content that matter most throughout their day. Founded in 1984 and based in Waterloo, Ontario, RIM operates offices in North America, Europe, Asia Pacific and Latin America. RIM is listed on the NASDAQ Stock Market (NASDAQ:RIMM) and the Toronto Stock Exchange (TSX:RIM). For more information, visit www.rim.com or www.blackberry.com.

In this article: 4g, att, blackberry, blackberry 4g playbook, blackberry playbook, Blackberry4gPlaybook, BlackberryPlaybook, hspa plus, HspaPlus, hspa_, jim balsillie, JimBalsillie, lte, playbook, rim, sprint, tablet, verizon, verizon wireless, VerizonWireless, vzw
All products recommended by Engadget are selected by our editorial team, independent of our parent company. Some of our stories include affiliate links. If you buy something through one of these links, we may earn an affiliate commission.
Share
Tweet
Share