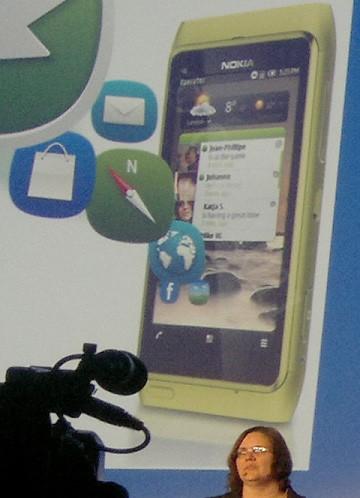 Perched behind Nokia's head of smart devices, Jo Harlow, at a recent event in China is what appears to be a new home screen on an N8, yet more evidence -- hot on the heels of the company's MWC event -- that Espoo still has plenty of love in the wings for its dead-platform-walking. Notably, it appears they're looking at migrating key information to the top of the screen to create a dedicated status bar, which would presumably stay visible as you navigate from screen to screen -- akin to most other platforms on the market -- accompanied by a string of soft button icons at the bottom. Interestingly, the UI in some respects mirrors what we saw on the leaked shots of the apparently killed N9 -- small black status bar and icons along the bottom -- which would seem to tell us one of two things: either the N9 was a Symbian device all along, or the company had planned on standardizing UI elements between its future Symbian and MeeGo roadmaps. Either way, this looks like a nice improvement... and in all likelihood, a far cry from what we'll see when these guys start busting out Windows Phone 7 devices.
In this article: jo harlow, JoHarlow, n8, nokia, preview, symbian, ui, user interface, UserInterface, ux
All products recommended by Engadget are selected by our editorial team, independent of our parent company. Some of our stories include affiliate links. If you buy something through one of these links, we may earn an affiliate commission.
Share
Tweet
Share