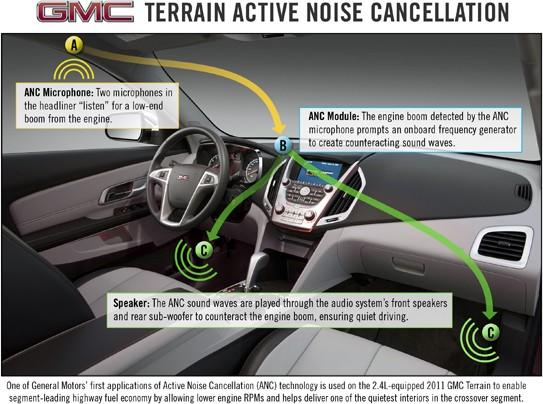 GM claims its new Terrain has other SUVs beat when it comes to fuel efficiency, and they're citing active noise cancellation -- a concept near and dear to audiophiles everywhere -- as one of the driving factors that puts it 4MPG above the competition. Basically, the Terrain's enlisted a new one-touch "Eco mode" that allows its four-cylinder engine to run at a lower torque, decreasing engine speeds, and thus saving gas. The thing is, this increased fuel efficiency comes with a "low-end frequency boom," which is where the noise cancellation sets in: two microphones built in to the car's headliner detect the boom, prompting a frequency generator to pump counteracting sound waves through Terrain's speakers. Simply put, GM's just getting rid of an unpleasant hum. So a quieter car isn't necessarily a greener car, but we'll take a more fuel efficient SUV any day. If you're picking up what GM's laying down, check out the full PR after the jump.

Active noise cancellation does double duty on Terrain. The technology enables the crossover to deliver a segment-leading EPA-rated 32 mpg in highway driving while ensconcing the driver in one of the quietest interiors in its segment. On the highway, Terrain easily tops the 28-mpg rating of Honda CR-V, Toyota RAV4 and Ford Escape.

"The use of active noise cancellation for fuel economy benefit on Terrain is among the first at GM," said Paul Beaker, program engineering manager for GMC Terrain. "It has strong potential for implementation on other four-cylinder vehicle programs."

When GM engineers set out to deliver segment-leading fuel economy on Terrain they chose to lower the 6-speed transmission's gear shift points to enable the Ecotec 2.4L four-cylinder engine to run at lower rpm torque. In this "Eco" mode, which the driver can activate with a click of a button on the console, the torque converter clutch engages at lower engine speeds to help save gas. While the engineering action improved fuel efficiency by up to one mpg, it also created an objectionable low-end frequency boom. To counteract that boom the engineers turned to active noise cancellation technology.

Terrain's noise cancellation system relies on two microphones embedded in the headliner to detect the hum and prompt an onboard frequency generator to create counteracting sound waves through the audio system's speakers and sub-woofer. The system also reduces higher rpm engine noise at highway cruising speeds to help keep the vehicle interior quiet.

The use of direct injection and variable valve timing also help maximize Terrain's fuel efficiency. In a direct injection engine, fuel is fed straight to the engine's combustion chamber, allowing it to burn more evenly and thoroughly. For the driver, that can translate to better mileage and greater power to the wheels. Variable valve timing eliminates the compromise inherent in conventional fixed valve timing and allows a previously unattainable mix of low-rpm torque – even torque delivery over a broad range of engine speeds – and free-breathing, high-rpm horsepower.

Program engineers improved Terrain's highway fuel economy up to one mpg by reducing aerodynamic drag through the refinement of the front air dam, rocker panel, roof line, outside rear view mirrors and front bumper. By working on clay models in GM's state-of-the-art wind tunnel, the engineers were able to reduce its wind noise to ensure quiet driving.

"Aerodynamic refinement happens by the millimeter. There is a tremendous amount of science behind it and we have decades of knowledge to draw upon," said Justin D'Souza, GM aerodynamic performance engineer. "You can take an outside rear view mirror that worked well on one vehicle, put it on a different vehicle and get a completely different result. The end result has to work well aerodynamically and be true to the vehicle design."