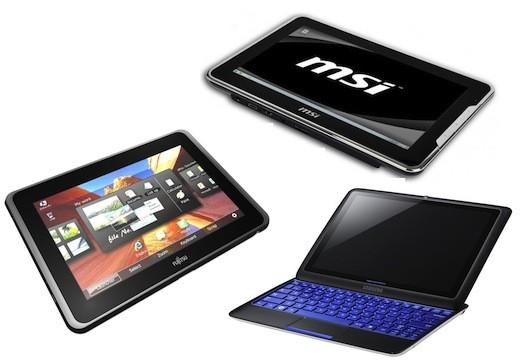 Intel's spent the last nine months prepping its Oak Trail silicon to improve the battery life and performance of Windows 7 tablets, and come the end of next month we should finally have some slates with the new 1.5GHz Atom Z670 chip inside. While Fudzilla has heard that the tablets will hit in the general March time frame, the eagle-eyed guys at Netbook News spotted the Fujitsu Stylistic Q550 press materials stating that the new platform will launch on March 30, 2011. That seems to line up with what we've heard on timing, since both the Oak Trail-powered Samsung Sliding PC 7 and MSI WindPad 100W were announced with March availability. Chances are we will hear more about it all at CeBIT next week, but honestly, at this point we're just really eager to get one of these in our hands to see what Chipzilla's really improved.
In this article: atom, Atom Z670, AtomZ670, Intel, Intel oak trail, IntelOakTrail, MSI WindPad 100W, MsiWindpad100w, Oak Trail, OakTrail, Samsung Sliding PC 7 Series, SamsungSlidingPc7Series, sliding pc 7, Sliding PC 7 Series, SlidingPc7, SlidingPc7Series, tablets, timing, Windpad
All products recommended by Engadget are selected by our editorial team, independent of our parent company. Some of our stories include affiliate links. If you buy something through one of these links, we may earn an affiliate commission.
Share
Tweet
Share