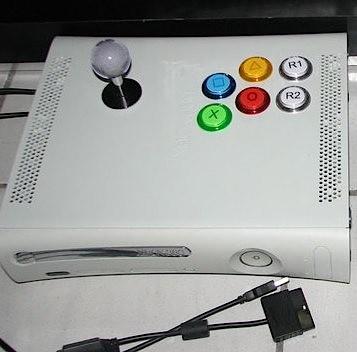 In the most recent of Xbox 360 hacks, a modder named Morris has crafted a PS3 controller out of none other than -- as ironic as this may seem -- a dead Xbox 360. That's right, somewhere out there, a PlayStation 3 has slain its mortal enemy, mercilessly gutted the internals and now has a modded Xbox as its eternal slave. The case contains all of the buttons you need to partake in a classic beat-'em-up -- a joystick, the four PlayStation buttons, R1 and R2. There's plenty more to gander at in the source link and enough in the way of detail and instruction to get started on your own arcade stick too.
In this article: 360, arcade, arcade stick, ArcadeStick, case mod, CaseMod, microsoft, mod, modder, Morris, playstation, playstation 3, Playstation3, ps 3, ps3, sony, xbox, xbox 360, xbox case mod, Xbox360, XboxCaseMod
All products recommended by Engadget are selected by our editorial team, independent of our parent company. Some of our stories include affiliate links. If you buy something through one of these links, we may earn an affiliate commission.
Share
Tweet
Share