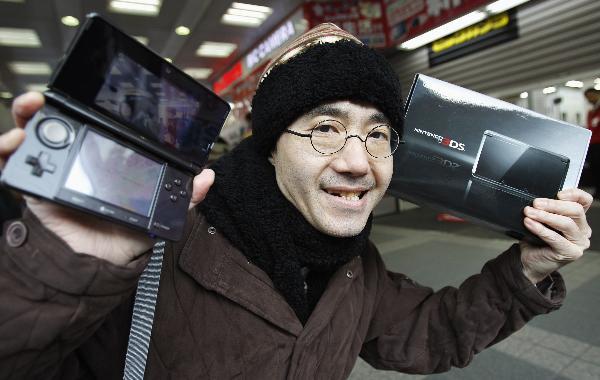 You won't be able to snap one up at your local GameStop for a full month, but the Nintendo 3DS had a solid launch in Japan today, reportedly liquidating nearly its entire initial shipment of 400,000 spiffy stereoscopic gaming handhelds by the end of the day. Some of those sales were to customers waiting in a few lines up to 2,000 persons long, but those lines were exceptions to the norm -- several publications note that very few stores actually had any lines to speak of, as most Japanese electronics retailers sold out when the 3DS went on pre-order over a month ago. Get a refresher on what to expect from the system here (and here) or read all about the surprisingly orderly Japanese launch at our source links.

Update: Our friends at Engadget Japanese were on hand for the 3DS launch, and picked up a pair of systems themselves -- get a closer look at one of the first retail 3DS units in the gallery below!

In this article: 3D, 3DS, debut, gaming, handheld, launch, Nintendo, Nintendo 3DS, Nintendo3ds, release, released, sold out, SoldOut, stereoscopic 3D, Stereoscopic3d
All products recommended by Engadget are selected by our editorial team, independent of our parent company. Some of our stories include affiliate links. If you buy something through one of these links, we may earn an affiliate commission.
Share
Tweet
Share