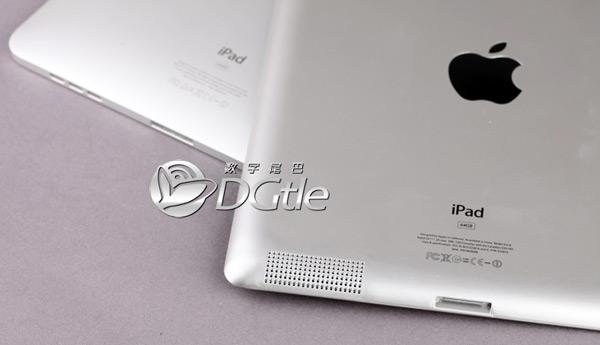 Look, not even the source of these images is absolutely certain that the device in his possession is a legitimate iPad 2, but we can't very well leave you spending your entire day anticipating Apple's new tablet launch without a potential candidate for what it might eventually look like. The above mockup has been procured over in China (where else?) and seems to tally closely with speculation we've been hearing about this hardware refresh -- namely, a slimmer profile, an almost entirely flat back, bigger speaker, and of course, rear- and front-facing cameras. We've looked into the digits on the back of the device and the model number is one for the original Apple TV while the FCC ID is for a WiFi-only iPad, but those could be mere placeholders on what is, once again, a mockup and not a real working tablet. The SIM card slot looks to have been repositioned to a slot that was once expected to house an SD card reader. Other tidbits of interest here include the 3G antenna, whose white cover is expected to be black on final units, and the sloped power button and headphone jack, bringing those witty "jumbo iPod touch" jokes to mind. Boy, those never get old. Jump past the break for a few more pics.

In this article: apple, in the wild, InTheWild, ipad 2, Ipad2, leak, mockup, rumor, shenzhen, slate, speculation, tablet
All products recommended by Engadget are selected by our editorial team, independent of our parent company. Some of our stories include affiliate links. If you buy something through one of these links, we may earn an affiliate commission.
Share
Tweet
Share