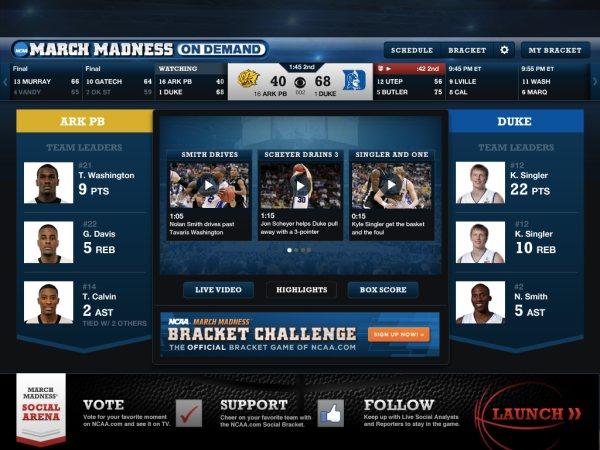 Every year CBS has enhanced its March Madness On Demand experience, from HD VOD on cable boxes to HD streaming on PCs before adding PiP and paid mobile access last year. For 2011, a new deal has brought in Turner Sports to not only provide enough channels to air all the games in high definition (we figure you'll find CBS, TNT and TBS on the channel guide with no problem, but with some of the games diverted to lesser known TruTV HD check the HDSportsGuide link below to see if it's in your area yet) but also expand the streaming experience by promising higher quality video, personalized channel lineup and social tie ins. If you're on the go, the mobile client for iOS devices (sorry, no Android or other mobile OSes) is free this year so you can keep that fiver in your pocket this time. There's another pic of the iPad client, a video trailer and all sorts of details waiting after the break, so click through to find out more or just wait for the free apps to hit iTunes March 10th.

Atlanta, Ga., March 3, 2011 /PRNewswire/ - Turner Sports, CBS Sports and the NCAA announced today the newly enhanced NCAA March Madness on Demand (MMOD) live products to be launched for the upcoming 2011 NCAA Division I Men's Basketball Championship. NCAA March Madness on Demand, produced by Turner Sports Interactive, will be available across multiple digital platforms, including online (http://mmod.ncaa.com), as an iPhone and iPod Touch app, and for the first time, as an iPad app. Among the new features, MMOD will offer improved live viewing with richer quality and larger format streams, a personalizable channel lineup feature, and live stats and social companion views.

NCAA March Madness on Demand will provide live streaming video of every game of the new 68-team tournament as they are broadcast by CBS Sports and Turner Sports, starting with the First Four™ from Dayton, OH on March 15, and continuing through the Men's Final Four® semifinals and national championship game from Houston, TX on April 2 and April 4.

The 2011 NCAA March Madness on Demand will be free to users across all platforms, including the full versions of the iPad, iPhone and iPod Touch apps over Wi-fi and 3G, continuing its run as the largest annual digital sports event. The NCAA March Madness on Demand mobile applications will be available for free starting March 10 from the App Store on iPad, iPhone and iPod Touch located at www.itunes.com/appstore/.

"At Turner Sports we pride ourselves on being a leader in digital innovation and are thrilled to partner with CBS Sports and the NCAA to enhance one of the most popular online properties in sports," said Lenny Daniels, executive vice president and chief operating officer, Turner Sports. "We believe the new components we are offering will give the fan a fully immersive experience through online, mobile and on tablets from the start of the First Four through the final buzzer of the National Championship."

"Since CBSSports.com, CBS Sports, and the NCAA first partnered to produce this service in 2003, NCAA March Madness on Demand has seen explosive growth and is now the unquestioned digital sports event of the year," said Jason Kint, Senior Vice President and General Manager, CBSSports.com. "As MMOD continues to be enhanced and distributed on multiple platforms as part of our new partnership with Turner, the ultimate winners are the millions of college basketball fans around the world who now have more ways than ever to follow this great tournament."

"MMOD is the primary online destination for fans of NCAA March Madness," said Greg Shaheen, Interim Executive Vice President of Championships and Alliances, NCAA. "The NCAA enters a new dimension with Turner Sports and CBS Sports that provides men's basketball fans with enhanced features that will further enrich their online and mobile viewing experience. With cutting-edge enhancements, MMOD is certain to provide our fans with an incredible online experience during this year's men's basketball championship."

Additional Features Include:
My Channels makes it easy for fans to find games on TV. The online, iPhone, iPod Touch and iPad apps list all four TV networks: TBS, TNT, truTV and CBS by default. Through My Channels, fans can plug in their zip code, select their TV provider and see their channel lineup for every game.
The Game Center View is a true companion experience with live in-game stats. Fans can follow key stats of every team while watching games on TV. A full range of team stats include box score stats, team leaders, scoring streaks, biggest lead, and foul trouble.
The Coke Zero NCAA March Madness Social Arena will provide a gathering point for the March Madness conversation that will be displayed as a Social commentary. Complete with live social hosts, fan comments, and TBS and CBS courtside reporters, it will capture news, trends, and sentiment of fans throughout the tournament. The March Madness Social Arena will extend onto Facebook and NCAA.com with a way for fans to LIKE teams in each round and build their social score in a innovative view of the traditional bracket, as well as comment on games, interact with the social hosts, and rate highlights.
Previously produced and managed by CBSSports.com, NCAA March Madness on Demand is the Emmy award-winning video player that since its inception in 2003 has provided millions of fans around the world access to live video of the NCAA Division I Men's Basketball Championship, in the process becoming one of the largest annual events on the Internet. As part of the new 14-year multi-platform partnership between Turner, CBS and the NCAA, Turner Sports Interactive now produces NCAA March Madness on Demand while both Turner Sports and CBS Sports partner for the sales, marketing and presentation of MMOD. NCAA March Madness on Demand will continue to be launched from NCAA.com, CBSSports.com and SI.com as well as multiple Turner and Time Warner platforms.

As part of the agreement, CBS Sports and Turner Sports will broadcast live and in their entirety every game from the Division I Men's Basketball Championship across four national television networks: TBS, TNT, truTV and CBS – a first for the 73-year old championship. The tournament field will be announced on Selection Sunday on March 13 on CBS and the tournament will begin with the First Four airing in primetime on Tuesday, March 15 and Wednesday, March 16 on truTV.

About CBS Sports
CBS Sports, a year-round leader in television sports, broadcasts a portfolio of events on the CBS Television Network, including the NFL's American Football Conference; THE NFL TODAY; college basketball, including the NCAA Division I Men's Basketball Championship; golf, including The Masters(r) and PGA Championship; college football, including the SEC ON CBS; the U.S. Open Tennis Championships; CBS SPORTS SPECTACULAR, including track & field, auto racing and gymnastics. In addition, the division directs CBS Sports Network, a 24-hour national cable network; produces INSIDE THE NFL for SHOWTIME; and partners with CBSSports.com in creating a recognized leader among sports Internet destinations.

About the NCAA
The NCAA is a membership-led nonprofit association of colleges and universities committed to supporting academic and athletic opportunities for more than 400,000 student-athletes at more than 1,000 member colleges and universities. Each year, more than 54,000 student-athletes compete in NCAA championships in Divisions I, II and III sports. Visit www.NCAA.org and www.NCAA.com for more details about the Association, its goals and members and corporate partnerships that help support programs for student-athletes. The NCAA is proud to have the following elite companies as official Corporate Champions - AT&T, Capital One and Coca-Cola - and the following elite companies as official Corporate Partners - Enterprise, The Hartford, Hershey's, Infiniti, LG, Lowe's, Planters, Unilever and UPS.