BlackBerry Bold 9930 now available from Verizon for $250, on contract 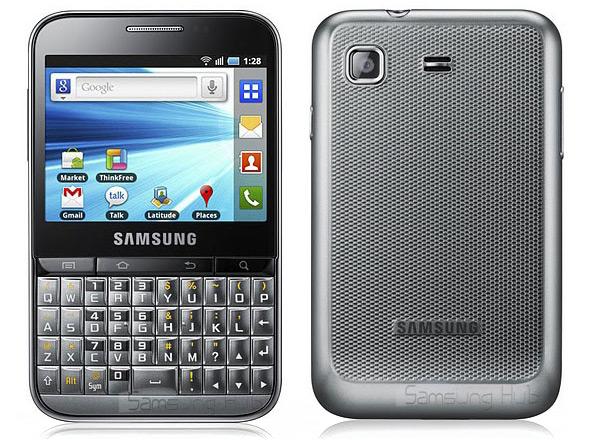 Samsung has just taken the veils off yet another Android handset in its rapidly expanding portfolio, this one targeting those BlackBerry-addicted portrait QWERTY keyboard lovers. The Galaxy Pro squeezes a four-row button array beneath a set of Android keys and a 2.8-inch touchscreen, while its insides are filled with an 800MHz processor of an unspecified variety and a 3 megapixel cam with autofocus skills. UK carrier Three has already confirmed it'll be offering this Froyo handset -- via an unlisted YouTube video we've embedded for you after the break -- and others should soon be coming out with their own announcements and, eventually, pricing.

Update: Samsung has sent along its official press release and a full spec sheet. See them after the break.

The Samsung Social Hub Premium gives one-touch access to emails, instant messages and social networking accounts and benefits from the speed and control of the Galaxy Pro's dual-input interface. Powered by the Android™ 2.2 'Froyo' platform, the Galaxy Pro has access to over 150,000 high-quality apps and services from Android Market™, such as the latest games for entertainment, up to date interactive maps and news feed services.

Simon Stanford, Managing Director, Samsung Mobile UK and Ireland said: "The Samsung Galaxy Pro is the perfect device for everyone looking to manage their busy work and social lives. The Social Hub Premium provides a simple way for our customers to stay in touch with their friends and colleagues – via work and personal emails, Facebook, Twitter and text messages. You get it all in one inbox, which is so much more efficient. Running on Android 2.2 and with brilliant entertainment features it's another great addition to the Galaxy range."

Samsung Social Hub Premium is ideal for juggling work and personal communications, managing multiple social networks and receiving high volumes of messages and emails. The Social Hub Premium brings together email, SNS and IM accounts to a single inbox, for simplified, instant access to all communications. Twitter feeds and Facebook updates, work and personal emails and text messages are collated in one central contact list. Furthermore, the Galaxy Pro is equipped with the "Think Free" Office Document Editor, for viewing and editing MS Word, Excel and PowerPoint documents on-the-move.

The Samsung Galaxy Pro's dual-input is a combination of a touch-screen and QWERTY keyboard, for swift, accurate typing, the QWERTY keyboard provides desktop-computing accuracy, while the touch-screen offers fast fingertip control. Together, they provide an efficient and enhanced user experience.

The Samsung Galaxy Pro is equipped with a 3.0 Megapixel camera for still image or video capture. Pictures can be viewed on the clear and bright 2.8" display before being uploaded online, supported by WiFi and Bluetooth capability.

The Samsung Galaxy Pro will be available during the second quarter in the UK market followed by other European countries, Middle East, South East Asia and India.

In this article: 2.8-inch, 800mhz, android, android 2.2, Android2.2, candybar, froyo, galaxy pro, GalaxyPro, portrait qwerty, PortraitQwerty, qwerty, samsung, samsung galaxy pro, SamsungGalaxyPro, three, three uk, ThreeUk, touchwiz, video
All products recommended by Engadget are selected by our editorial team, independent of our parent company. Some of our stories include affiliate links. If you buy something through one of these links, we may earn an affiliate commission.
Share
Tweet
Share