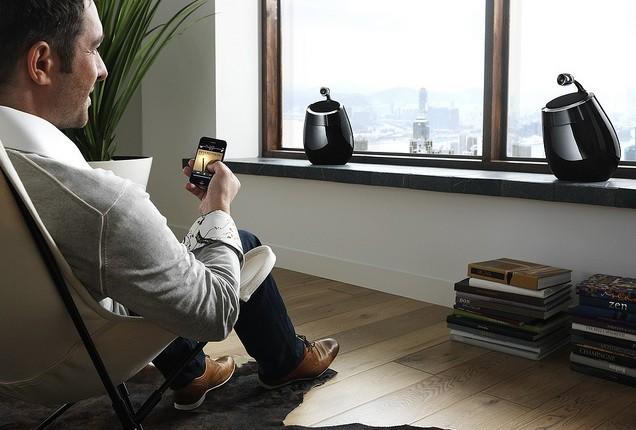 Add one more to the list of manufacturers supporting Apple's AirPlay. Philips just announced its Fidelio SoundSphere speakers that support WiFi music streaming over Apple's new media sharing "standard" from your PC or Mac iTunes library or from any iOS device. Unfortunately, Philips isn't providing any useful detail about these speakers with free-floating tweeters and 360-degree sound. But hey, if you're the kind who buys speakers based on appearance alone, then the €799 (about $1,100 -- nearly twice as much as the Zeppelin Air) price tag for the speaker pair + dock should be no problem when they hit Europe sometime in May. Press release and bonus pic after the break.

Barcelona, Spain – Philips today unveils the merging of two of its most successful product lines, SoundSphere and Fidelio, in order to bring music lovers the ultimate, full-fidelity listening experience. Combining the impressive functionality of its docking speaker range Fidelio, the superior sound quality of the Philips SoundSphere technology and Apple's AirPlay®, the Philips Fidelio SoundSphere docking speakers delivers authentic sound – while your device simply stays in your hand.

With Airplay, the Philips Fidelio SoundSphere docking speakers give you both an amazing sound and hassle-free access to all your music from iTunes.

The Sound is in the Air
The Philips Fidelio Soundsphere docking speaker utilizes Airplay1 to seamlessly play music over a home Wi-Fi network from iTunes on Mac and PC, iPhone, iPad and iPod touch. With AirPlay, you enjoy all your music via the brilliant speakers of the Philips Fidelio SoundSphere without plugging in cables or even docking your device.

In this article: airplay, apple, Fidelio, Fidelio SoundSphere, FidelioSoundsphere, philips, Philips Fidelio SoundSphere, PhilipsFidelioSoundsphere, SoundSphere, wifi, wireless speaker, wireless speakers, WirelessSpeaker, WirelessSpeakers
All products recommended by Engadget are selected by our editorial team, independent of our parent company. Some of our stories include affiliate links. If you buy something through one of these links, we may earn an affiliate commission.
Share
Tweet
Share