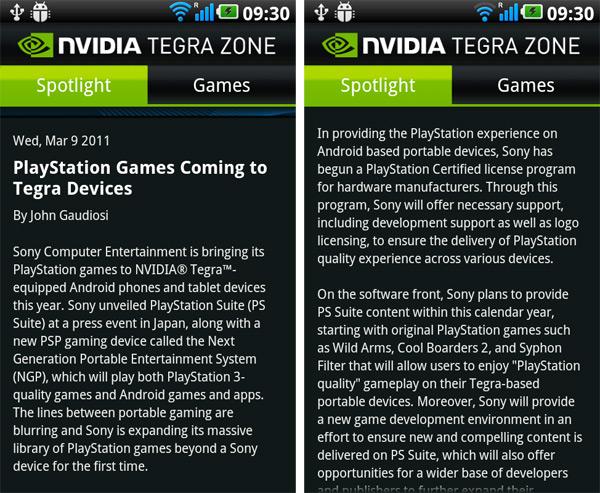 NVIDIA's Tegra Zone app, freshly launched this month, has become the source for a nifty little bit of Sony-related news: the PS Suite that is currently slated to deliver PlayStation One games to the Xperia Play is coming to Tegra 2 devices. Of course, if you're keeping up with your Sony tablet exclusives, you'd already know that the company's expected to unveil a Tegra 2 slate this year, so don't go assuming that your Xoom will necessarily get the PlayStation Certified badge. On a separate note, we're also hearing this expansion of supported hardware will be followed up with the eventual addition of PlayStation 2 games to the Suite. Those are clearly not on the immediate horizon and we suspect Sony might be waiting for quad-core mobile chips -- such as the one within its upcoming NGP -- to hit the market before rolling the last-gen console's wares out to pockets and messenger bags across the world.

Update: Upon further investigation, we've been unable to confirm the claim about PS2 games being on Sony's PS Suite roadmap. Android and Me reports it to have come from NVIDIA, but the original Tegra Zone post makes no reference to PS2 games. We've updated the post to reflect this.
In this article: android, certified, games, gaming, mobile gaming, MobileGaming, nvidia, playstation, playstation 2, playstation certified, playstation one, playstation suite, Playstation2, PlaystationCertified, PlaystationOne, PlaystationSuite, ps suite, ps2, PsSuite, sony, suite, tegra, tegra zone, TegraZone
All products recommended by Engadget are selected by our editorial team, independent of our parent company. Some of our stories include affiliate links. If you buy something through one of these links, we may earn an affiliate commission.
Share
Tweet
Share