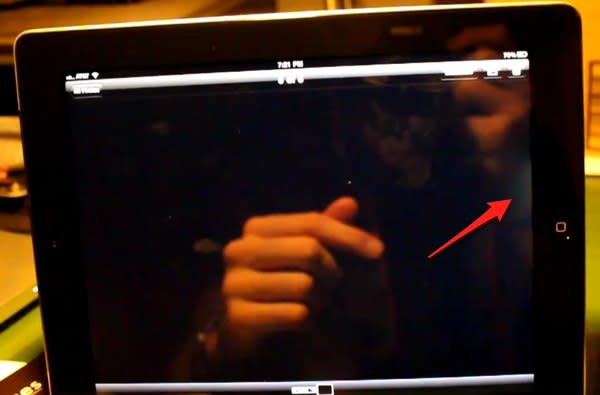 Now that many of you have collected and used your second generation iPad tablets for a few hours, we're starting to see the inevitable reports of defects. Thus far, two issues have bubbled to the surface. The first issue -- yellow spots beneath the LCD glass -- is reminiscent of the same fresh-from-the-factory iPhone 4 issue that resolved itself just as soon as the bonding agent used for the LCD glass had time to evaporate. The second issue, which is being conflated with the first, is characterized by light bleeding through from the outer edges of the LCD panel. The bleeding is most noticeable when watching a dark scene in a movie or using an app with a black background as demonstrated in the picture above and video embedded after the break. For those affected, the issue can be minimized or exacerbated by adjusting the brightness in settings. So what say you dear reader, are you also a bleeder?

In this article: apple, backlight, backlight bleeding, BacklightBleeding, bleeding, defect, ipad, ipad 2, Ipad2, lcd, poll
All products recommended by Engadget are selected by our editorial team, independent of our parent company. Some of our stories include affiliate links. If you buy something through one of these links, we may earn an affiliate commission.
Share
Tweet
Share