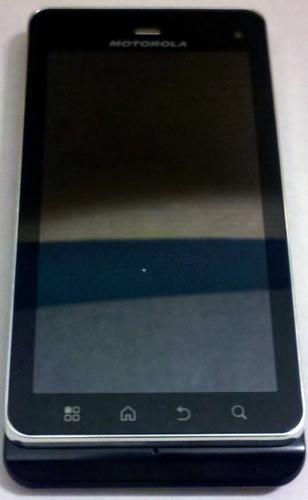 The Motorola Droid 2 and Droid X are both headed toward their one-year anniversaries this summer, which has pretty much become the culling hour for a smartphone of any creed these days. Their successors, ingeniously titled the Droid 3 and Droid X 2, have seemingly made an appearance over at HowardForums, courtesy of longtime forum member wnrussell. He's also kindly provided imagery of a heretofore unknown device, called the Targa, which promises Verizon 4G LTE and has a protrusion on its rear that looks to be dedicated to accommodating an outsized camera sensor. It reminds us most of Motorola's XT720, though it sports a chrome outline to its body similar to what you see above on the purported Droid 3. Click past the break to get an eyeful of this Targa device and its Droid X 2 brandmate.

In this article: 4g, android, daytona, droid, droid 3, droid x, droid x 2, Droid3, DroidX, DroidX2, in the wild, InTheWild, leak, lte, mb870, moto, motorola, motorola droid 3, motorola targa, MotorolaDroid3, MotorolaTarga, rumor, speculation, targa, verizon, verizon wireless, VerizonWireless, vzw, wnrussell
All products recommended by Engadget are selected by our editorial team, independent of our parent company. Some of our stories include affiliate links. If you buy something through one of these links, we may earn an affiliate commission.
Share
Tweet
Share