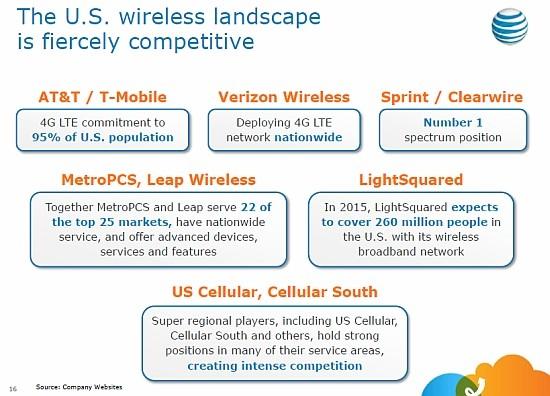 This afternoon, AT&T and T-Mobile dedicated a twenty-eight page PDF to convincing regulators that their $39 billion aquisition wouldn't violate antitrust law, using images like the one above. Well, as you can imagine, Sprint had something to say about that, and you can read it immediately below.

The combination of AT&T and T-Mobile USA, if approved by the Department of Justice (DOJ) and Federal Communications Commission (FCC), would alter dramatically the structure of the communications industry. AT&T and Verizon are already by far the largest wireless providers. A combined AT&T and T-Mobile would be almost three times the size of Sprint, the third largest wireless competitor. If approved, the merger would result in a wireless industry dominated overwhelmingly by two vertically-integrated companies that control almost 80% of the US wireless post-paid market, as well as the availability and price of key inputs such as backhaul and access needed by other wireless companies to compete. The DOJ and the FCC must decide if this transaction is in the best interest of consumers and the US economy overall, and determine if innovation and robust competition would be impacted adversely and by this dramatic change in the structure of the industry.

Last week, rumors flew that Sprint, not AT&T, would be the one to join T-Mobile and create a vast wireless network, and while we haven't heard any proof of that so far, it probably wouldn't be terribly happy to settle for "number 1 spectrum position" if the tables were indeed turned.
In this article: antitrust, aquisition, ATT, business, buyout, carrier, merger, mergers and acquisitions, MergersAndAcquisitions, Sprint, T-Mobile, wireless
All products recommended by Engadget are selected by our editorial team, independent of our parent company. Some of our stories include affiliate links. If you buy something through one of these links, we may earn an affiliate commission.
Share
Tweet
Share