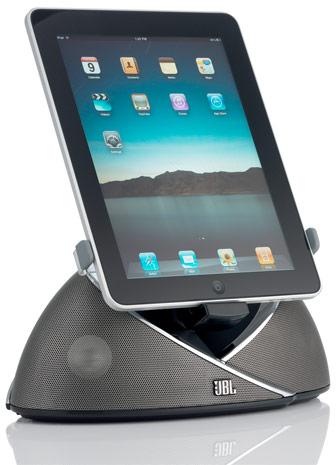 This planet we call home needs another iDock about as bad as we need another Charlie Sheen running around aimlessly, but no matter -- we're getting one, and it's being delivered from JBL. The company has just outed its first-ever iPad speaker dock, the OnBeat. Truth be told, it's capable of handling iPod touches, iPhones and iPads (no word on the iPad 2), but it's clearly engineered to hold the largest of the bunch best. Aside from providing joints and jams to those situated in your living room (or basement, if that's how you roll), it can also pipe Netflix and YouTube content directly to one's television via a composite video output, and if you're running around sans an iDevice, the 3.5mm auxiliary jack ensures that any other source will still function just fine. You'll also be able to charge and sync any docked devices, but you'll be asked to dole out $149.95 in order to bring one home when it ships next month.
Show full PR text

Company whose legendary JBL brand brought the first sound to cinema introduces the new loudspeaker dock, bringing the same dynamic sound to the next wave of technology: iPad®, iPhone® and iPod® devices

Stream action-packed movies and intimate family photos and videos, and share the hottest content on the Web in your living room with family and friends through the addition of an optional composite cable that can send video content from the device directly to your TV.

"Imagine what moviegoers must have felt when they heard sound paired with film for the first time in history. This is what we hope to accomplish for the next era of entertainment experiences with products such as the JBL OnBeat for the iPad, iPhone and more," said David Slump, president, HARMAN Consumer Division. "Our goal is to awaken our senses to the power that great sound and music can have on bringing media to life through the most cutting-edge devices out on the market right now."

The new JBL OnBeat also features a USB connection to sync and charge devices when connected to the iTunes® music library (cable not included), and a 3.5mm stereo mini-jack auxiliary input that connects to virtually all portable media devices (cable not included). The dock has the dynamic JBL Weave design styling that is as sculptural as it is conversation-starting. Brackets to attach the iPod, iPhone and iPad to the dock are included in the package. The JBL OnBeat also serves as a charging station for your iPod or iPhone while it is docked.

The JBL OnBeat loudspeaker dock is available in April in black for $149.95. For additional information or to purchase, visit http://www.jbl.com/onbeat.