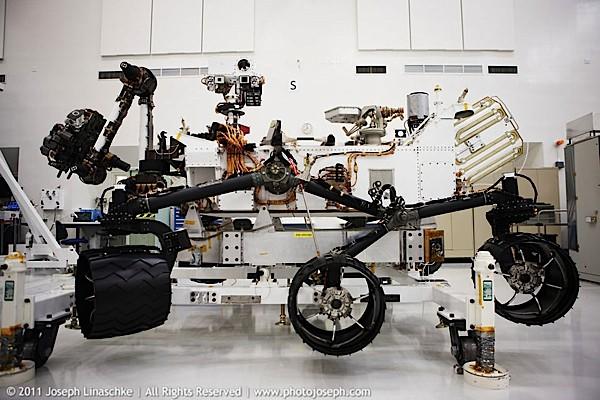 NASA's already given us a glimpse at its Mars rover, courtesy of a USTREAM broadcast a few months back, but the crew over at BoingBoing has taken one small step for mankind by going even further in-depth with Curiosity before it launches in November. One lucky photographer was granted permission into the Jet Propulsion Laboratory in Pasadena, and the fruits of his bunny-suited labor showcase the nooks and crannies of NASA's latest and greatest. We're still kind of bummed that the rover won't be equipped with a zoom 3D camera as originally planned, but we've got a hunch James Cameron's taking it even harder. Be sure to hit the source link for a whole smattering of more angles, if intergalactic spacecrafts are your thing.
In this article: 3d camera, 3dCamera, curiosity, james cameron, JamesCameron, jet propulsion lab, JetPropulsionLab, jpl, mars, mars exploration, mars rover, mars science laboratory, MarsExploration, MarsRover, MarsScienceLaboratory, mastcam, nasa, probe, research, rover, space, space exploration, space probe, SpaceExploration, SpaceProbe
All products recommended by Engadget are selected by our editorial team, independent of our parent company. Some of our stories include affiliate links. If you buy something through one of these links, we may earn an affiliate commission.
Share
Tweet
Share