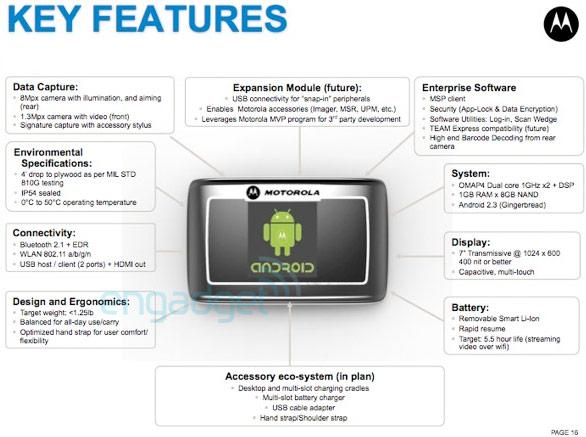 We've been keeping our eyes on Motorola's plans to sink its claws into the enterprise market for at least the past couple of months, and it looks like the company is ramping up its efforts with a rugged Android tablet fit for the workplace. A presentation provided to us by a helpful tipster outlines Moto's plans to be the "first physical embodiment defining Android for the Enterprise," with a Gingerbread-equipped tablet entering beta testing this October. As you can see from the slide above, the slate will sport both a 1.3MP front-facing camera and an 8MP rear-facing camera "with illumination and aiming" for barcode scanning. It's also carrying a dual-core 1GHz OMAP 4 CPU, 1GB RAM, 8GB NAND, a 7-inch LCD display, Bluetooth 2.1 + EDR, 802.11 a/b/g/n WiFi, and USB connectivity. It should also pack enough juice to supply five and a half hours of streaming video, and should be able to withstand a four foot drop, extreme temperatures, excessive dust, and splashing water. From the look of things, this tablet's going to be more at home in the workshop than the boardroom, but we'll just have to wait and see what becomes of it once the thing makes it out of beta.