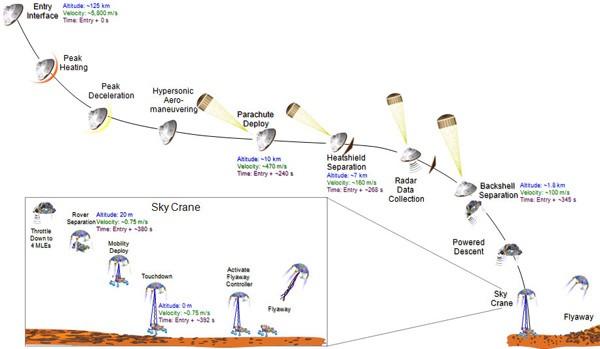 Sending a rover to a distant planet is no small feat, so we might as well make the landing even more spectacular, right? That's exactly what NASA has in mind for its Curiosity Mars rover, albeit for more practical reasons. Launching in late 2011 and expected to land on Mars in August 2012, this mobile laboratory will see a unique descent after entering the Martian atmosphere: there'll be the usual separation from the heatshield and backshell, but at about 380 seconds into the entry, the rover will be gently lowered down by wire from a "sky crane," as opposed to taking a leap of faith. Once the landing is complete, the hovering sky crane will then detach from the rover and fly off for a dramatic disposal -- let's just hope it won't hit the now-dormant Spirit. See for yourself in the video above.
In this article: animation, Curiosity, Jet Propulsion Laboratory, JetPropulsionLaboratory, jpl, landing, mars, mars rover, mars science laboratory, MarsRover, MarsScienceLaboratory, nasa, rover, simulation, space, spacecraft, video
All products recommended by Engadget are selected by our editorial team, independent of our parent company. Some of our stories include affiliate links. If you buy something through one of these links, we may earn an affiliate commission.
Share
Tweet
Share