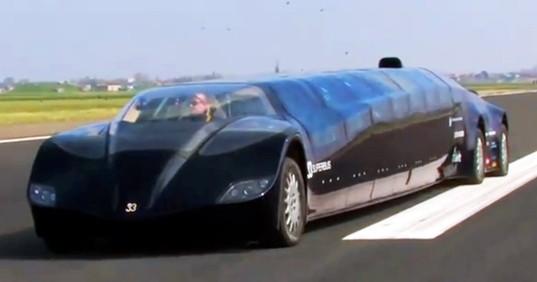 The world of renewable energy received a jolt of innovation this week as Inhabitat reported on a groundbreaking new solar technology that could render photovoltaics obsolete -- see Engadget's take right here -- and a plan to use common oven rust to generate immense amounts of cheap energy. We also saw green power projects pick up steam around the world as Pakistan announced it will build its first on-grid solar system, Chevron kicked off plans to invest in wind power for Kazakhstan, and Eriksson Architects unveiled an energy-efficient geodesic gemstone city for China.

Green transportation tech blasted off as we took a look at the insane 23-passenger electric superbus that can hit 155MPH and the Phoenix roadster - the world's first biodegradable car. Volkswagen also turned heads as it unveiled an all-electric concept version of the classic VW Bus, and we saw sustainable transportation set sail as Zyvex unveiled the nanotech Piranha boat, which is 75% lighter, 40% stronger, and 400% more fuel-efficient than aluminum vessels. Finally, we showcased several hot new green vehicles as the Shanghai auto show began to rev up -- Luxgen's all-electric Neora concept car and Peugeot's Hybrid SXC.

In other news, this week we brought you the best and brightest green products from the 2011 Milan Furniture Fair - from an energy-absorbing lamp that never needs to be plugged in to the world's first color-changing OLED panels to a stunning pendant light made entirely from recycled drink cartons. We also showcased several designs for greener electronics - a revolutionary paper alloy that could enclose the gadgets of tomorrow and a gorgeous bamboo MacBook case - and we shared 7 ways to get your kid excited about photography.
In this article: architecture, Chevron, electric vehicle, ElectricVehicle, Eriksson Architects, ErikssonArchitects, geodesic, hybrid, Hybrid SXC, HybridSxc, inhabitat, inhabitats week in green, InhabitatsWeekInGreen, Kazakhstan, Luxgen, milan furniture fair, MilanFurnitureFair, Neora, oven rust, OvenRust, Peugeot, Piranha, rust, solar, superbus, Volkswagen, week in green, WeekInGreen, wind power, WindPower, Zyvex
All products recommended by Engadget are selected by our editorial team, independent of our parent company. Some of our stories include affiliate links. If you buy something through one of these links, we may earn an affiliate commission.
Share
Tweet
Share