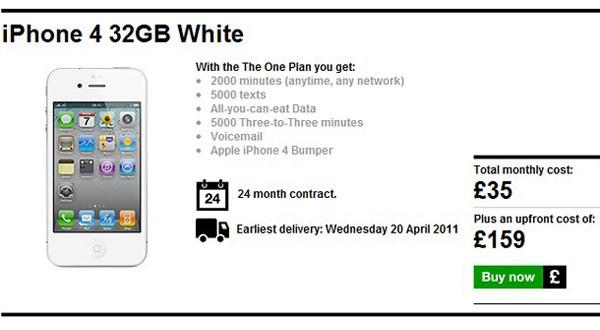 Looks like somebody pulled the trigger on an order page for the mythical white iPhone 4 a little early over at Three UK. The phone that had previously been listed on the carrier's site for a long, long time (sans any ability to actually order it) has now sprouted up a page all its own with the magical option to "buy now." We managed to get all the way through to an order confirmation page, so if it's a mistake it's a very thoroughgoing one. Calling up Three's telephone ordering line and PR personnel brought us no closer to finding out the truth, but this particular order page was discovered via a tweet by a Three affiliate -- whose tweets have since gone private -- suggesting it was dug up from someone in the know. Our suspicion is that Apple's finally about ready to dish this phone up to the people and Three has been caught testing out its order page ahead of the inevitable onslaught of white iPhone orders. Hit the source link to see the premature revelation for yourself.

Update: Three finally wised up to the fact nobody else was yet offering the pale phone for sale and has pulled the page. For now.

"This page is not live at the moment, it was built at the same time as the iPhone black page so that we have it ready when and should the time come to launch white. For now, it's a hidden page that's inactive."

In this article: apple, color, early, ios, iphone, iphone 4, Iphone4, leak, on sale, OnSale, order, order page, OrderPage, premature, sale, three, three uk, ThreeUk, uk, united kingdom, UnitedKingdom, white
All products recommended by Engadget are selected by our editorial team, independent of our parent company. Some of our stories include affiliate links. If you buy something through one of these links, we may earn an affiliate commission.
Share
Tweet
Share