'Minecraft' cross-play is here for mobile, PC, Switch and Xbox

Microsoft will unify most 'Minecraft' platforms this summer 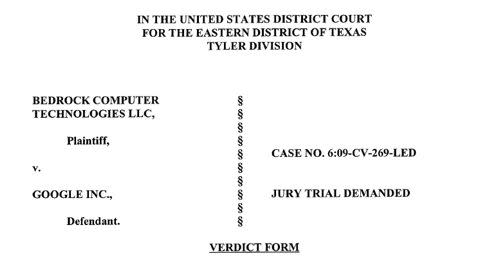 An East Texas jury recently awarded a relatively small computer firm patent troll a pretty hefty settlement (in you and me dollars) in a patent infringement suit that named Google, Yahoo, Amazon, AOL, and Myspace as defendants. The jury awarded Bedrock Computer Technologies LLC $5 million for a patent concerning the Linux kernel found in the software behind Google's servers. The patent in question is described as a "method and apparatus for information storage and retrieval using a hashing technique with external chaining and on-the-fly removal of expired data." It appears Google is the first of the defendants to face a judgement, but we have a feeling this decision might have set a precedent. Of course, no infringement suit would be complete without a healthy helping of appeals -- and considering the decision came from a district court, we can almost guarantee this case is no exception. You didn't expect the big guys to stay down for the count, did you?

Update: As it turns out, the plaintiff in question here, Bedrock Computer Technologies, is actually owned by David Garrod, a lawyer and patent reform activist. Ars Technica profiled Garrod following the initial suit, pointing to the clear contradiction between his trolling and reform efforts. What's more, Bedrock sued Google and the rest of the defendants in June 2009. Just six months later, Bedrock was back in the courtroom, but this time it was on the receiving end. Red Hat, the company supplying the OS behind Google's search engine services, was suing Bedrock for patent invalidity.
In this article: Bedrock, Bedrock Computer Technologies LLC, BedrockComputerTechnologiesLlc, district court, DistrictCourt, google, Google vs. Bedrock, GoogleVs.Bedrock, guilty, infringement, law, lawsuit, linux, linux patent, LinuxPatent, patent, patent infringement, patent law, patent lawsuit, PatentInfringement, PatentLaw, PatentLawsuit, patents, suit, texas, texas court, TexasCourt
All products recommended by Engadget are selected by our editorial team, independent of our parent company. Some of our stories include affiliate links. If you buy something through one of these links, we may earn an affiliate commission.
Share
Tweet
Share