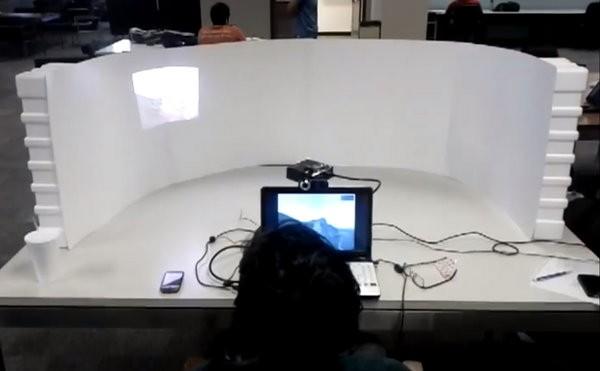 Although in the earliest stages of development, this virtual reality gaming rig already looks pretty intriguing. Engineered by clever kids at the University of Texas at Austin, it hot-wires an eye tracking camera to a motorised pico projector with the result that the player literally can't take their eyes off the screen. Wherever they look, that is where their view of the gaming world is projected. The rig makes most sense in a first-person shooter, although the students have also tried it in a flight simulator where the player uses their head to roll and pitch the aircraft. Yes, it looks rather similar to the Microvision PicoP laser projection gun we wielded at CES, but there's a key difference: the player does not need to hold anything or have anything attached to their body. This unencumbered Kinect-esque approach could potentially allow a greater sense of freedom -- except that, for it to work, the player is forced to sit directly in front of the eye tracker. Find a way to fix this, dear Longhorns, and you could be onto something. Video after the break.
In this article: eye tracker, eye tracking, eye-tracker, eye-tracking, EyeTracker, EyeTracking, first person shooter, FirstPersonShooter, flight sim, flight simulator, FlightSim, FlightSimulator, gaming, imersive gaming, ImersiveGaming, immersion, immersive, motorized, pico projector, pico-projector, PicoProjector, projector, university of texas, university of texas at austin, UniversityOfTexas, UniversityOfTexasAtAustin, UT, uta, video, virtual reality, VirtualReality, VR
All products recommended by Engadget are selected by our editorial team, independent of our parent company. Some of our stories include affiliate links. If you buy something through one of these links, we may earn an affiliate commission.
Share
Tweet
Share